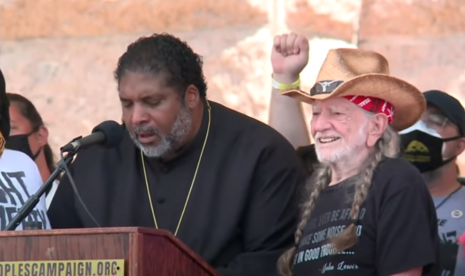 Tax dodger and country music artist Willie Nelson not only supports open borders, he doesn't much care who's voting in the United States. On Saturday the singer performed a controversial song about voting rights at a “Moral March for Democracy” rally at the Texas Capitol.

Nelson has famously admitted that “I have been supporting Democrats all my life,” and campaigned for Texas Democrat Beto O’Rourke in 2018. He helped to raise over $500,000 dollars for O’Rourke and personally donated $5,000. Nelson performed at major rallies for O’Rorke and angered many of his fans by doing so, but who cares about that when you have the opportunity to suck up to powerful politicians who can do favors for you?

The “Moral March” is organized by the Poor People’s Campaign who have been organizing rallies across the country in support of ending the filibuster, passing the For the People Act, raising the minimum wage and prohibiting any efforts to strengthen election integrity. Nelson performed his left-wing tune from 2018, “Vote ‘Em Out” during the most recent protest march from Georgetown to Austin. “If you don’t like who’s in there, vote ‘em out,” the song states.

Probably not the most tasteful song to sing when you’re complaining that voter ID laws are inhibiting voting.

“It is important that we ensure the right for EVERY American to vote and vote safely,” Nelson stated when he announced that he would perform the song in support of the cowardly Democratic state legislators who fled Texas in an attempt to block a bill on voting regulations from passing.

Laws making it more difficult for people to vote is un-American and are intended to punish poor people, people of color, the elderly, and disabled - why? If you can't win playing by the rules, then it's you and your platform — not everyone else's ability to vote.

Nelson has never been one for following the rules though. He barely escaped going to prison after the IRS came for the $16 million that he owed them. Even then, he wouldn’t have been so lucky if his loyal fan base hadn’t bailed him out.

The musician has openly touted leftist beliefs over the years and was a supporter of Bernie Sanders, Barack Obama and Hillary Clinton. He opposed Trump’s border policies and says that “We have a statue that says: ‘Y’all come in,’." “I don’t believe in closing the border. Open them suckers up!” When asked how his charity Farm Aid supports immigrant farmworkers in the US, he said. “We need those folks,” Nelson says. “I used to pick cotton and pull corn and bale hay and I’m lucky to play guitar now, but we have to have the people who want to work, and take care of them.”

The Democrats hate millionaires unless they agree with them and donate those millions to their left-wing indoctrination efforts.