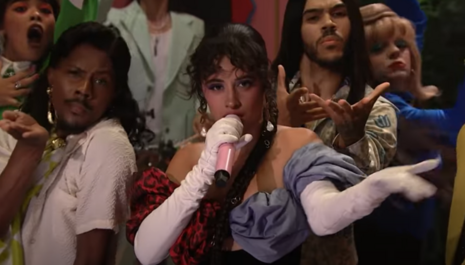 On July 23, Cabello performed her new hit “Don't Go Yet” on The Tonight Show With Jimmy Fallon and had a group of background dancers with her on stage. The singer posted a short clip of the performance on Twitter and one of her dancers triggered the insane lefties who have been trained to see racism in everything. Here is the performance:

The comments on her Twitter post exploded with trolls accusing the dancer in a bright purple shirt with a horrible spray tan of being in blackface. One fan wrote, “Camila, I love you, but ok, there’s a mistake in your performance, one of the dancers was practicing blackface and that’s unforgivable, you wanted representation but failed, pay more attention.”

Cabello was obviously shocked because the performance was undeniably diverse, and come on, it’s Jimmy Fallon, they have to throw some comedy in there somewhere because the host doesn’t know how to make people laugh. Nonetheless, the singer took to Twitter yet again to issue an explanation and save herself from the whining adults that have tried to cancel her in the past.

Her post read, “hey! So this dude was just supposed to be a white man with a terrible spray tan. We purposefully tried to pull together a multicultural group of performers, the expectation was not that everyone in the performance needed to be Latin.” It’s a shame that she hasn't learned her lesson about ignoring people who will find any excuse to hate on you because their lives are not exciting enough. “The point was to try to make each person look like an over the top 80’s character just like in the video,” the explanation continued.

Dylan Pearce, the dancer in question, even posted a picture of his abhorrent makeup on his Instagram story with the caption “in case you missed my spray tan last night on @jimmyfallon with @camilacabello.” He also posted another photo on his story that evening comparing himself to an emoji with a medium skin tone of the 5 available options, which people are citing as evidence that his behavior was racist. "Emoji fashion on point," he wrote and thanked his friend for pointing it out to him that a female emoji in a similar pose matches the color of his shirt.

Cabella will learn eventually (we hope) that the left is never satisfied and the goalposts are always moved. Editor for The Intercept Brazil, Bruna de Lara, felt the need to prove this point by commenting on the artist’s explanation:

No matter the original intention, the guy's posts are telling another story – I mean, he literally compared himself to a black woman emoji. That is very clearly offensive. This is not ok, apologizing is the very least you could do.

Well, can we finally cancel Jersey Shore now that spray tans are racist?