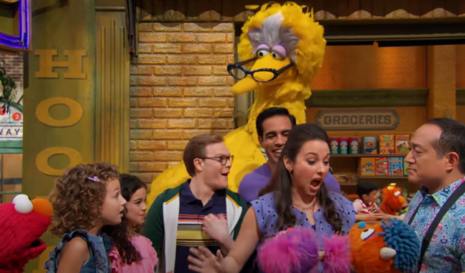 Next stop on the LGBT train: Sesame Street. It's the latest TV show to join the pursuit of indoctrinating our children. In a new episode called “Family Day” released on June 16 the program decided to panders to the woke mob and celebrate pride month by introducing a gay couple who are attending the party with their daughter. If you think it’s going to stop here, think again.

Sesame Street has been a source of liberal propaganda for several years now. Just a few months ago the franchise added ethnic muppets into an episode that taught kids about the color of their skin. They also released a show at the beginning of the year which featured a cross-dressing actor and a lesson about the LGBTQ letters. The days of Sesame Street providing valuable lessons for children are over, it’s all about brainwashing your kids now.

Alan Muraoka, an actor on the show, posted a statement on Facebook in which he worships his own work. He said that he is so “honored and humbled” to have co-directed the most gay episode of the series yet. “Sesame Street has always been a welcoming place of diversity and inclusion,” wrote Muraoka. “Love is love, and we are so happy to add this special family to our Sesame family. Happy Pride to all!!!!” +

Naomi A. Moland, the author of a book about Sesame Street and a faculty member at American University’s School of International Service, praised the episode for its “creative” ways of addressing “complex issues in child-friendly ways.”

Enter the Gaystopo: GLAAD President and Chief Executive Sarah Kate Ellis called the addition of the gay couple is a “milestone” event in family programming according.

Christy Tirrell-Corbin, executive director of the Center for Early Childhood Education and Intervention at the University of Maryland, told The Washington Post that she “encourages parents” to watch shows such as this one. “It opens up the opportunity for a parent to talk to their children about different family types and express support for families of same-sex parents,” she said.

Although the couple may be new to the show, the idea of indoctrination on the children’s show has been teased for a few years now. Back in 2018, the show’s writer claimed that he thought of Bert and Ernie as “a loving couple.” Even before that there were jokes about the characters' sexualities. The official Sesame Workshop Twitter account set the record straight and denied this idea, but not before the rumor caught traction with the LGBT community.

Stop trying to over-sexualize America’s youth and focus on teaching something that is actually valuable.