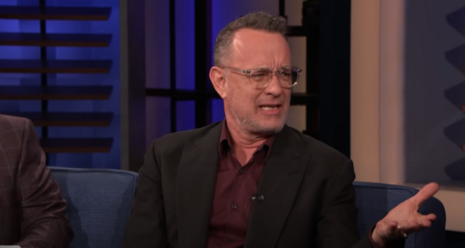 "I consider myself a lay historian who talks way too much at dinner parties," Hanks said in his article. Yes, you do talk way too much Tom but so does everyone else in Hollywood. He went on to discuss how he was never taught about the massacre during his years in school and how "history was mostly written by white people about white people like me."

Very nice, Tom. Way to start the struggle session. Writing that probably made you feel good. The problem is that NPR full-time TV critic Eric Deggans read your piece. And Deggans is a full-on race warrior (who also has has that special contempt for America that comes from sucking at the taxpayer teat.) That means, Tom, that you haven't begun to atone for your sins.

Deggans published his own op-ed discussing the hypocrisy of Hanks’ piece. “He is a baby boomer star who has built a sizable part of his career on stories about American white men Doing the Right Thing. He even plays a former Confederate soldier in one of his latest films, News of the World,” says Deggans.

Imagine white men doing the right thing! Imagine former rebel soldiers not being beyond redemption! Hanks didn't go far enough and doesn't understand that his very existence is an affront to a racial absolutist like Deggans:

People often say columns such as the one by Hanks are published to start a conversation. Well, here is my suggestion: Let's make part of that conversation how baby boomer filmmakers have made fortunes amplifying ideas of white American exceptionalism and heroism.

And how their responsibility now lies with helping dismantle and broaden the ideas they helped cement in the American mind.

That's NPR folks. And it's the tribal hatred shredding our culture. Well-meaning liberals like Hanks just don't get it.