On Tuesday July 7, Rachel Maddow – evidently unaware of MSNBC’s similar previous rules on debates – slammed Fox News for their debate policy limiting the stage to the top 10 candidates in national polling. The Rachel Maddow Show host claimed the right-leaning cable network “has killed the early nominating states and their role in choosing who is a contender for the Republican nomination for president.”

At the end of her monologue to start the program, Maddow argued that “[t]he next three weeks are going to be off the charts bizarre. We’ve never tried to run a presidential nominating process like this before.”

She insinuated that the coming weeks will likely eliminate several GOP candidates because of Fox News’s debate rules:

Fox News has made it this way. It’s completely unprecedented in American history. We have no idea how it’s going to go. But it’s the end of the line for at least six candidates. Seven, maybe even more. Some big name candidates, they’ve got to fight to the political death over the course of three weeks.

As TVNewser notes, MSNBC arbitrarily changed their rules to prevent Dennis Kucinich from taking the debate stage during the 2008 Democratic primaries. Similar debate rules have also been applied by both CNN and Fox News in the past. Maddow’s claim about the “unprecedented” nature of the debate rules used by Fox is simply inaccurate.

RACHEL MADDOW: At Bloomberg Politics today, they crunched the latest national polling data and found that basically if you take a snapshot right now, these seven candidates are fairly safe when it comes to their prospects for making the top 10 Fox News cut-off in national polling so they can compete in the debates. They say the sort of safe top seven are Jeb Bush, Donald Trump, yes, Donald Trump, Scott Walker, Rand Paul, Ben Carson, Marco Rubio, and Mike Huckabee. 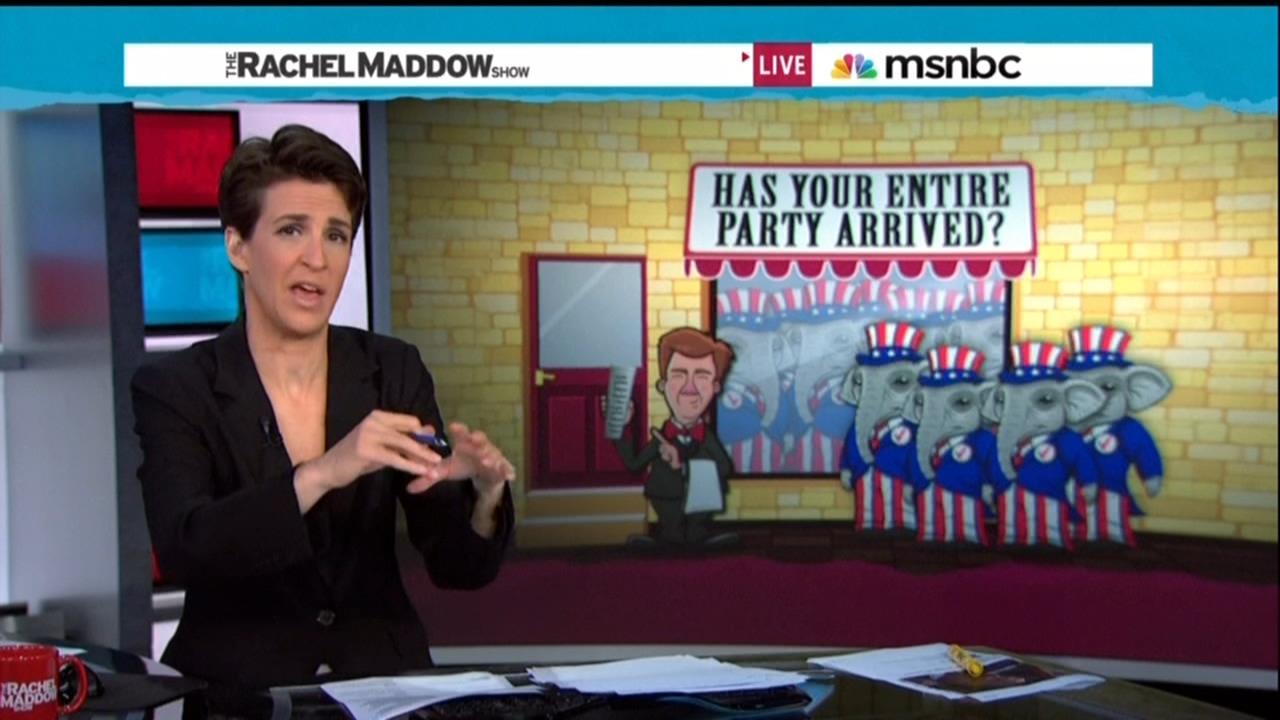 So, at least by one calculation, and who knows how Fox News is going to calculate it, but at least by one calculation at Bloomberg today, these top seven are fairly safe in terms of making the debate.But then in terms of the last three slots on the debate stage, it’s a war. These nine candidates, at least, will be competing for the last three slots. And statistically speaking, in terms of their national poll numbers, they are all infinitesimally close to each other. Any of them could make it.

But Fox News says only three of them will be allowed to compete for the presidential nomination by appearing in the Republican debates. Only three slots to be chosen from among Ted Cruz, Chris Christie, Rick Perry, Rick Santorum, Carly Fiorina, John Kasich, Bobby Jindal, Lindsey Graham, George Pataki and whoever else jumps in.

LINDSEY GRAHAM (R), SOUTH CAROLINA: It’s a methodology that excludes how you perform in Iowa, South Carolina, New Hampshire, where all 16 of us go. So, nationalizing the terms of entry into the debate marginalizes the effect of the early primary states. We should have polling based on how we do in Iowa, New Hampshire and South Carolina. That’s the one place we all go where you can compare everyone to each other. So, the nationalization of this debate by the RNC and Fox network is going to basically over time erode the early primaries, because if I’ve got a choice here, I’ve got to bump my numbers up, where do I spend money? Where do I spend time? I’m going to be focusing on getting my numbers up, coming to New Hampshire less.

MADDOW: That’s Lindsey Graham speaking with a New Hampshire radio station yesterday, saying that Fox News and their debate criteria mean that it’s no longer rational for presidential candidates to keep going to Iowa and New Hampshire. It’s no longer rational for them to keep going to the early voting states, if the thing that determines whether or not they’re allowed to compete for the nomination isn’t votes in the early voting states, but instead just national poll numbers.And so, naturally, actually quite rationally, he then in that same radio interview went on to bring up Brad Pitt again.

GRAHAM: If the goal to get into the debate is to have a national polling number, number one Brad Pitt would be in the debate because it’s just a name we know.

MADDOW: I think there is a new campaign slogan here: Brad Pitt, Lindsey Graham. At some level, admit it,  it makes sense. Feel free to use that. I don’t know if Lindsey Graham is going to up his national poll numbers enough for Fox News’s tastes just by mentioning celebrities over and over again. We will find out.

MADDOW:His approval rating in Iowa, promised votes at the Iowa caucuses, will have nothing to do with that whatsoever. It’s only national polls. Somebody in the Jindal campaign may want to suggest some of Lindsey Graham’s Brad Pitt magic, right, instead of Bobby Jindal and his supporters continuing to dump money down what is now an Iowa rabbit hole, thanks to the Fox News Channel and how the Fox News Channel has killed the early nominating states and their role in choosing who is a contender for the Republican nomination for president.

MADDOW: These next three weeks are going to be off the charts bizarre. We’ve never tried to run a presidential nominating process like this before. Fox News has made it this way. It’s completely unprecedented in American history. We have no idea how it’s going to go. But it’s the end of the line for at least six candidates. Seven, maybe even more. Some big name candidates, they’ve got to fight to the political death over the course of three weeks.