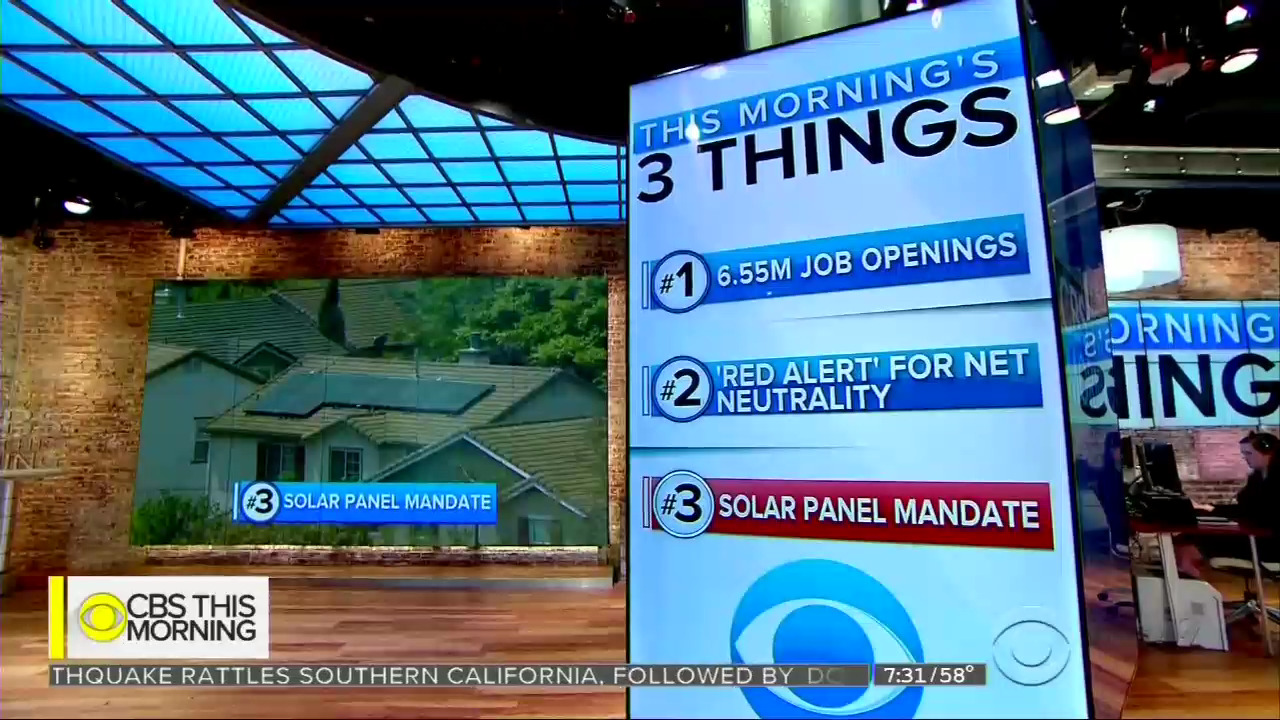 California is king when it comes to environmental regulations, but the latest decision to mandate solar panels comes at a high price. For homeowners.

Those costs of freedom of choice and almost $10,000 higher construction expenses per home didn’t matter much to California’s proponents of solar panels or the liberal media which downplayed costs and critics when they mentioned them at all.

Many California’s already struggle to afford housing and more regulations will increase prices yet CBS This Morning co-anchor Gayle King declared that it sounded like a “win-win for everybody” on May 9. And The New York Times led with affirming language calling California “a leader and trendsetter in its clean-energy goals” and referred to the latest regulation “a giant step” for those goals on May 10. That story also quoted three times as many quotes proponents as critics (6 to 2)

The Los Angeles Times unabashedly supported the rule. Its editorial board wrote “Of course California should require solar panels on new homes” on May 11, and a columnist also promoted the requirements saying “Here’s why Big Brother is on to something” on May 21.

The California Energy Commission voted on May 9, to recommend energy rules requiring solar panels on new homes to the state’s building regulations. The goal is to lower carbon emissions to reduce impacts on climate change and to meet clean energy targets. If the California Building Standards Commission accepts the rules as expected, the mandate will go into effect beginning Jan. 1, 2020. That would make California the first state to mandate solar panels.

The LA Times repeatedly emphasized the claim that the regulation would “save” homeowners money “in the long run,” while admitting it would raise the price of home construction.

On May 10, The New York Times quoted Energy Commission member Andrew McAllister who “led a building-code review that produced the proposal.”

McAllister insisted “any additional amount in the mortgage is more than offset” and “It’s good for the customer.” The LA Times also quoted McAllister that day saying, “The cash flow position of the homeowners is actually improved in these homes.”

Like those reports, This Morning, Associated Press and NBCNews online also touted the supposedly higher savings on utility costs over 30 years. The AP said customers would “recoup” the cost of solar panels “and more” in energy savings.

On This Morning, co-anchor Norah O’Donnell told viewers, “Analysts predict this mandate could add $10,000 in construction costs to single family homes, but residents could save $16,000 over 30 years on their energy bill."

To which Gayle King declared, “Sounds like a win-win for everybody involved,” as O’Donnell murmured “mmhmm.”

Reports relied heavily on proponents included the commission members who voted for the regulation such as David Hochschild who claimed it was a “bold and visionary” step, and solar groups.

However, Hoover Institution senior fellow Lee Ohanian and economics professor Ted Temzelides wrote an opinion piece in the San Francisco Chronicle with higher cost estimates than most of the liberal media reports because the regulation package would not only mandate solar panel installation.

“Cost estimates by builders, however, which include the mandate’s additional requirement of more efficient appliances, lighting, windows and insulation, are $30,000 in higher construction costs,” Ohanian and Temzelides wrote.

They also exposed a flaw in the environmental justification for the mandate.

California has a housing shortage and only 30 percent of households can afford the median home price. According to Ohanian and Temzelides, that “will push even more Californians further away from large job centers, increase commuting times and further increase carbon emissions from autos.”

If so, mandatory rooftop solar won’t be helping reduce carbon emissions as much as regulators anticipate.