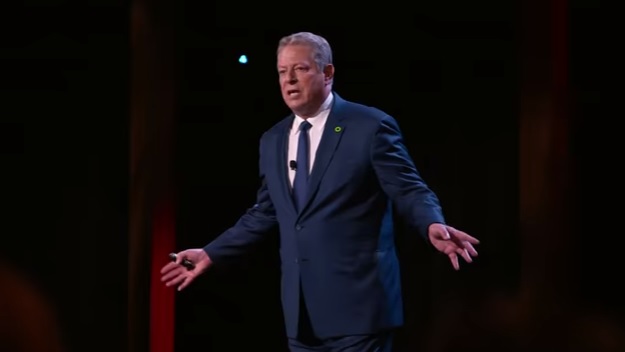 Buried in the credits of An Inconvenient Sequel, former vice president Al Gore and filmmakers make it clear they paid to make up for carbon generated during production. That’s part of Gore’s greenwashing of his documentaries through purchases of carbon offsets from Native Energy.

Presumably, this was an effort to preempt critics of Gore’s hypocrisy since the movie could easily be mistaken for an episode of “Where in the World is Al Gore?” The film constantly shows Gore sitting on airplanes or visiting disparate locations including Greenland, Miami, Tennessee, NYC, Beijing (China), Washington, D.C., Delhi (India), Manila (Philippines), Paris and Georgetown, Texas.

An Inconvenient Truth was “offset” the same way, with payments to the same company. In fact, The Los Angeles Times reported in 2007, that some portion of approximately $1,000 spent on offsets for AIT were earmarked “for the $45-million project, known as the Owl Feather War Bonnet Wind Farm” on the South Dakota Sioux reservation.

But the funds allocated to that wind farm more than a decade ago have done nothing to lower anyone’s carbon emissions. Zip. Zero. Nada.

Because according to a 2017 article from KCET community news outlet that wind project is “still in limbo” after years of delays by the Bureau of Indian Affairs and others involved, lease expirations and various problems.

The LA Times also reported that some portion of AIT’s offset spending went to a methane digester in Pennsylvania. The Department of Agriculture paid for the bulk of the project with the farmer making up the difference. Native Energy supplied a small amount of funding in return for a contract on ALL the project’s carbon reductions for “the next 20 years,” the LA Times reported.

In another case in Alaska, Native Energy contributed about 1 percent of the overall project cost “yet claimed 100% of its carbon reductions.”

The Christian Science Monitor reported in 2010 that Native Energy’s style of offsetting was “controversial,” because it sells offsets for projects “in the works.”

“NativeEnergy sells it emission reductions upfront — and says they will be verified later, when they occur,” CS Monitor wrote.

There are many who criticize carbon offsetting as useless, and it isn’t only conservatives. Liberals and the liberal media have said offsetting does “little or nothing to combat global warming.” A Guardian investigation found problems ranging from fraud to the inability to accurately measure the impact of “carbon saved” or projects that count future reductions in carbon as much as 100 years out.

"If you really believe you're carbon neutral, you're kidding yourself," Gregg Marland, a fossil-fuel pollution expert at Oak Ridge National Laboratory in Tennessee told the LA Times back in 2007. Referring to carbon offsets he said, "You can't get out of it that easily."

Even the chief executive (at the time) and co-founder of Native Energy admitted to the LA Times that people should first do what they can to reduce their emissions before buying offsets: “the only way to really get to zero unless you stop driving, stop traveling.”

After purchasing offsets that were at least partially worthless, Gore and the makers of An Inconvenient Sequel doubled down — giving money to Native Energy again. The film came in 15th at the box office its opening weekend. As for traveling, it’s clear Gore does not intend to stop. The seemingly frantic pace of his domestic and international travel shown in An Inconvenient Sequel, or his promotional tour for the film, is no aberration.

Gore flew about 2,854 miles just from Seattle to New York in order to do a CNN Town Hall with Anderson Cooper for the new film. That’s 1.3 tons of carbon for a single trip, or roughly an average person’s carbon use for three weeks.

In a London interview with The Guardian published July 30, Gore mentioned having just been in Sweden, the Netherlands, Sharjah (United Arab Emirates), San Francisco, NYC, Los Angeles, Los Vegas and Nashville in about two weeks.

The Guardian’s Carole Cadwalladr wrote, “I assume this amount of travel is connected to the release of the film, but no.’I’ve been at this level for the past 10 years and longer.’ He hesitates to use the word ‘mission’, he says, and then uses it. ‘When you feel a sense of purpose that seems to justify pouring everything you can into it, it makes it easier to get up in the morning.’”

HIs home energy use is also extravagant, in spite of his claims to it being so energy efficient. It uses energy equivalent to 34 average American homes, Daily Caller reported.

Gore clearly thinks his “mission” entitles him to a chug carbon incessantly in order to indoctrinate people around the world to his climate agenda.