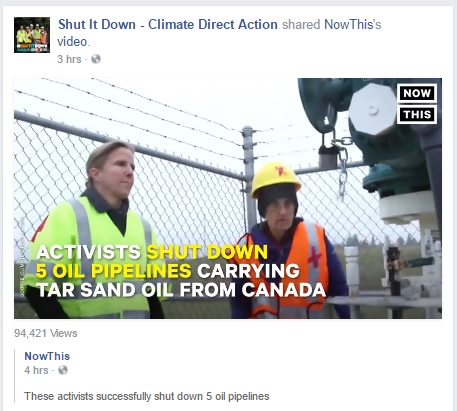 While many activists fighting the Dakota Access oil pipeline have been exposed and even arrested for trespassing on the property, Climate Direct Action turned to criminal eco-terrorism in “solidarity” on Oct. 11.

Climate change activists disrupted crude oil flowing through multiple pipelines by tampering with pipelines in four states simultaneously, according to Reuters. Enbridge Inc. pipelines in Minnesota had to be temporarily shut down as well as Spectra Energy’s Express Pipeline in Montana.

Bloomberg reported that in the case of Enbridge’s pipelines, the the protesters used bolt cutters to interfere with valves.

“Activists in four states were arrested after they cut padlocks and chains and entered remote flow stations to turn off valves in an attempt to stop crude moving through lines that carry as much as 15 per cent of daily U.S. oil consumption. The group posted videos online showing the early-morning raids,” Bloomberg said.

Reuters pointed out that pipeline companies and experts said the tampering could have caused environmental damage such as ruptures or leaks due to a pressure buildup.

"Tampering with energy infrastructure is a dangerous activity and it could cause harm to citizens and surrounding communities, which is unacceptable," said Canada's Energy Minister Jim Carr.

"Closing valves on major pipelines can have unexpected consequences endangering people and the environment. We do not support this type of action," Weimer said.

It wasn’t the first time environmental activists disrupted a pipeline either. In 2015, protesters broken into a restricted area to try to close a valve of an Enbridge pipeline near the Quebec-Ontario border and filmed their “dangerous” acts. After manipulating the valve, they locked themselves to it with u-locks.

The Dakota Access Pipeline protests have attracted many liberal protesters including Black Lives Matter groups, actress Shailene Woodley — who narrated her arrest for trespassing on Facebook Live — and left-wing journalists.

Left-wing Democracy Now! host Amy Goodman reported from the pipeline protests on Sept. 3, as protesters trespassed and confronted bulldozers and security personnel. Some are shown throwing rocks at security. The video prompted Morton County to issue an arrest warrant for criminal trespassing against Goodman. On Sept. 12, Goodman bragged about her protest footage and the warrant for her arrest on her show.