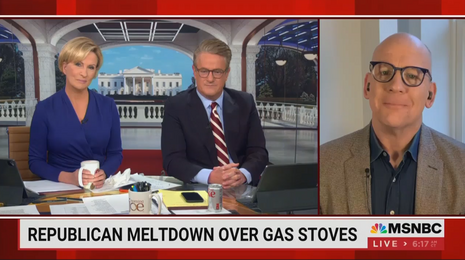 MSNBC National Affairs Analyst John Heilemann kicked off Martin Luther King Jr. Day with a tirade on GOP opposition to gas stove bans. On the Jan. 16 edition of Morning Joe, he said “[The GOP is] addicted to this culture of lies and conspiracy theories that they have fomented, right?” Except, the proposed ban wasn’t fictitious nor conspiratorial.

Bloomberg News released a story Jan. 9 headlined: “US Safety Agency to Consider Ban on Gas Stoves Amid Health Fears.” But according to Heilemann’s rant, the concern over a gas stove ban is just a conspiracy theory directed at stoking furor in the GOP base. U.S. Consumer Product Safety Commission Commissioner Richard Trumka reportedly propagandized to Bloomberg News about the “hidden hazards” of gas stoves and proclaimed that “[a]ny option is on the table. Products that can’t be made safe can be banned.” Trumka was forced to backtrack his comments later following severe political backlash, but Heilemann treated Trumka’s initial dystopian remarks as if they didn’t exist.

“[T]hat is the sugar high, you know, but political parties get addicted to sugar highs. It just happens that the sugar high that the Republican Party is addicted to is like bad bathtub meth,” Heilemann spewed. It’s telling that Heilemann happens to host a show on Showtime called The Circus, because acting like a collection of rambling liberal clowns “addicted” to “bad bathtub meth” is pretty much all MSNBC does at this point.

Heilemann’s diatribe continued to devolve. “[Republicans are] high on that [conspiracy] sugar,” Heilemann belched. “It's not just rotting their teeth. It's like rotting their brains at the same time, and it's rotting their ability to be competitive outside this very narrow piece of the electorate that's willing to believe this bullshit, as I will call it even on this most holy of secular holy days.”

Heileman is in no position to be whining about “conspiracy theories” when he’s the same person who concocted a nutty one of his own. He blamed the GOP for Russia invading Ukraine, despite Democrats controlling both Congress and The White House at the time.

Even MSNBC’s sister network, NBC News, released a story Jan. 10 headlined: “Ban new gas stoves, a federal safety commissioner proposes; CPSC says no such official plan yet.” But Heilemann railed how the allegations were somehow indicative of the “economy” and “culture” of conspiracy theories. The Washington Post noted in a Jan. 14 newsletter that "one of the four commissioners of the U.S. Consumer Product Safety Commission surprised the entire country by saying in an interview that the agency was considering a "ban on gas stoves." [Emphasis added.]

The Wall Street Journal Editorial Board ripped apart the media gaslighting on Trumka’s remarks: “[W]e didn’t make up Mr. Trumka’s quote. We and others responded to it.” There “really is a culture war coming over gas stoves,” said The Journal. “Progressives want to impose their values on the lifestyle of everyone else, including in the kitchen. If subsidies don’t work, coercion follows. When they can’t win the political debate, they resort to brute government force. They really are coming for your stove.”

Conservatives are under attack. Contact MSNBC at (800) 952-5210 and hold it to account for gaslighting people over Trumka’s dystopian remarks on gas stoves.