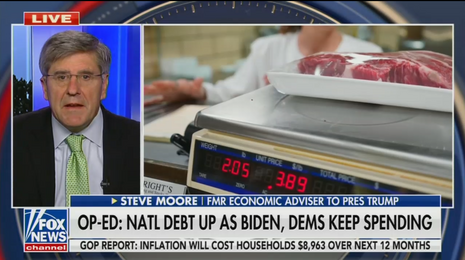 Moore rebuked Republicans and Democrats for abusing Americans’ hard-earned tax dollars as if it were Monopoly money during the Jan. 2 edition of Fox News Live. “I’ve got to say this: Shame on Republicans — shame on Democrats in Congress for what they did last week” when “they passed that $2 trillion spending bill.”

Moore specifically held the GOP’s feet to the fire: “Your job in 2023 is to cut government spending as much as you possibly can. It’s a cancer cell.”

Moore noted that “[t]he reason we saw this massive inflation under [President Joe] Biden was that he spent $4.1 trillion over the amount we would normally spend and of course that caused this forest fire of higher inflation.” Apparently Congress didn’t get the message.

Moore added that “[w]hat happened at the end of 2022 with Chuck Schumer and Mitch McConnell making this horrific deal. It doesn’t bode well for 2023 in terms of getting our finances straight and getting anywhere near a balanced budget.”

The New York Post Editorial Board wrote Dec. 26 that “laughable pieces of pork” riddled the ominous omnibus package. Examples of “pork” included “self-named monuments for various legislators” and a “chauffeur for the IRS commissioner,” none of which will do a thing to bring inflation under control.

The Post similarly pointed out that Biden presided over a national debt explosion from “from around $28 trillion to $31.43 trillion.” The deficit is “is also growing by leaps and bounds,” the Post reported.

It was $1.4 trillion at the end of 2022, “the fourth highest on record.” In effect, this would mean “massive tax hikes for future generations or colossal service cuts at the most basic level of government. Somebody has to pay for all this.” Apparently, Congress’ actions suggest that it isn’t really concerned about whose “pay[ing] for all this.” Rather, the purse-controlling behemoth seems to be obsessed with just sinking the American economy further into the cesspool of debt and high inflation with impunity.