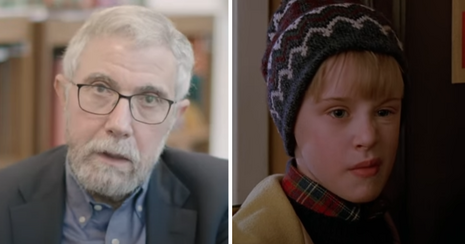 Biden signed his eco-utopia bill into law yesterday, which allocates $369 billion in taxpayer dollars to new climate spending. Right on cue, Krugman released a new op-ed slobbering how he “wrote back in that 2019 thread, ‘If we’re going to pass anything that helps avert [climate] catastrophe, it will have to be a Christmas tree.’” Krugman’s arbitrary usage of “Christmas tree” was in reference to a “bill that offers a lot of specific payoffs to various interests. And if news reports about the signing ceremony are right, today is Christmas.” To that end, Krugman concluded in his infinite wisdom, “Yes, the Inflation Reduction Act is a Christmas tree.”

Krugman justified his Christmas analogy for “the incredible fact” that “we have, after decades of fruitless appeals for action, done something major about climate change.” Sure, it’s not the left's preferred measure of a carbon tax, but Krugman spun that at least it’s something to push the U.S. toward some pie-in-the-sky Green Utopia. “For now, however, we’re tackling climate change with carrots, not sticks, with subsidies, not taxes. And that’s OK.” He even claimed that experts "believe that it will make a big difference to emissions." Never mind that the “worthless” and astronomically expensive IRA, which places enormous inflationary burdens on taxpayers, still manages to make the whole facade more of a case of how the (ironically green) “Grinch Stole Christmas.”

But Krugman proceeded to make the IRA appear like a mammoth basket of goodies that in his opinion would be better policy than climate taxes at the moment:

[T]he recent history of energy technology — revolutionary cost reductions for renewable energy that seem to have been jump-started by government aid — suggests that at least for now, with low-emission technologies still in their infancy, there’s a strong case for industrial policy as opposed to, or in addition to, carbon pricing.

CATO Institute Director of Tax Policy Studies Chris Edwards pointed out that “[b]oth Tax Foundation and Penn‐​Wharton find that the [IRA] would actually increase deficits the first few years, and thus have the opposite effect on inflation as the ‘reduction’ promised by the bill’s title.”

In addition, Hoover Institution visiting fellow and climate expert Bjorn Lomborg pointed out in a recent interview on Fox Business that the IRA would have a negligible impact on climate change. Lomborg concluded that one estimate of a reduction in carbon emissions found that the world’s temperature wouldn’t budge by even a “thousandth of a degree fahrenheit. That’s just, nothing!” But all that context seems lost on the same Krugman who once absurdly propagandized that the Democrats may ‘save’ civilization with their beloved "Christmas tree" of an IRA.

Conservatives are under attack. Contact The New York Times at 800-698-4637 and demand it continue to distance itself from Krugman’s pro-Biden propaganda.