‘I Was Wrong’: Paul Krugman Kicks Himself for Awful Inflation Takes 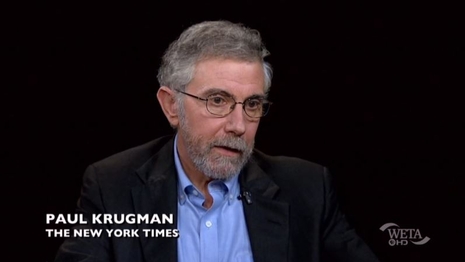 The New York Times opinion section actually published a shocking project where eight of their columnists admitted they were wrong about either economics, tech, foreign affairs or politics. At the top of the list was none other than “transitory” inflation gaslighter Paul Krugman.

The Times’s economic columnist published an op-ed with a headline that didn’t beat around the bush – for a change – and acknowledged how bad his unrealistic takes on the inflation crisis were for the past year. “I Was Wrong About Inflation,” read the headline. The disgruntled economist actually conceded that Biden’s irresponsible $1.9 trillion stimulus package was inflationary, despite his earlier objections to the contrary.

“Some warned that the package would be dangerously inflationary; others were fairly relaxed," Krugman wrote. “I was Team Relaxed. As it turned out, of course, that was a very bad call.” Krugman’s latest concession comes after recent news that inflation spiked 9.1 percent year-over-year in June, wiping out estimates of an 8.8-percent increase. 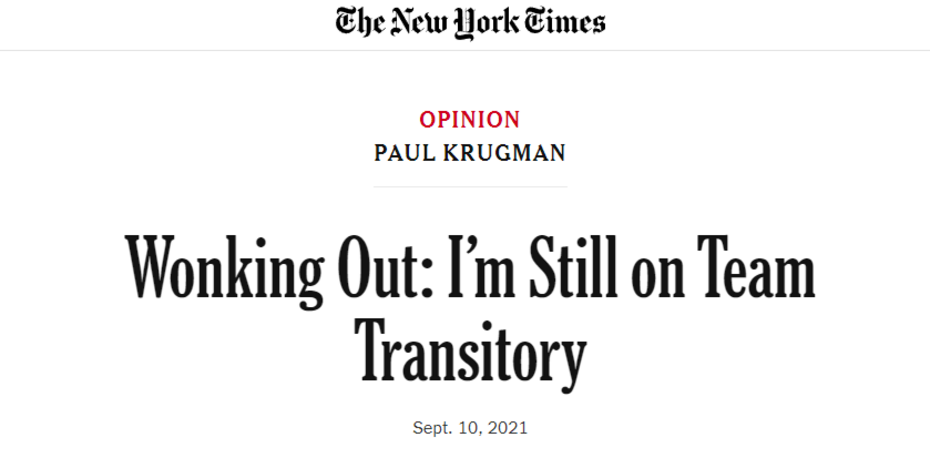 Times Opinion put Krugman’s piece at the top of a list that included other columnists for the newspaper like Tom Friedman and Farhad Manjoo who gave their mea culpas for bad takes that didn’t age well. But one of the columnists, apostate conservative David Brooks, used his confession to act like Krugman-lite and cry that he was “wrong” about the benefits of capitalism even though he recently argued in October 2021 that the U.S. needed to juice the economy with $4 trillion.

Still, it is great to see that The Times finally followed the MRC’s repeated calls to at least hold Krugman to account for the horrible economic arguments he’s been peddling for over a year:

It’s not necessarily easy for Times Opinion columnists to engage in public self-reproach, but we hope that in doing so, they can be models of how valuable it can be to admit when you get things wrong. 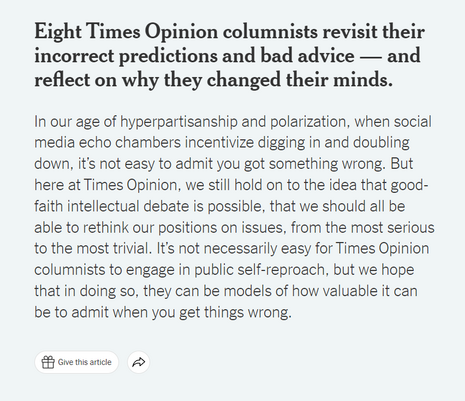 But true to form, Krugman tried to wiggle his way out of taking full responsibility. He excused that the situation was “complicated,” and tried to claim that his detractors were right for the “wrong reasons:”

[H]istorical experience wouldn’t have led us to expect this much inflation from overheating. So something was wrong with my model of inflation — again, a model shared by many others, including those who were right to worry in early 2021. I know it sounds lame to say that Team Inflation was right for the wrong reasons, but it’s also arguably true, [emphasis added.]

So those who criticized Krugman’s unfounded optimism were only right because of dumb luck? This is the same Krugman who argued in April that the “economy’s been pretty good” for poor people despite the fact that inflation was already soaring and crushing their wallets. Krugman should know that if it “sounds lame” to say your opponents are right for the “wrong reasons,” it probably is "lame."

Krugman proceeded to resurrect his zombie of an economic outlook by holding out hope that his optimism would eventually win the day. “Looking ahead, the economy is currently cooling off — the decline in first quarter G.D.P. was probably a quirk, but overall growth seems to be running below trend.”

A quirk? The Atlanta Federal Reserve’s GDPNow estimate shows U.S. economic growth clocking in at -1.6 percent in the second quarter, meeting the “practical definition of a recession” – as it would indicate two consecutive quarters of negative growth if that number holds firm.