The New York Times Magazine is getting in front of estimates that the U.S. GDP contracted again in the second quarter by slamming the country’s “obsession” with economic growth. 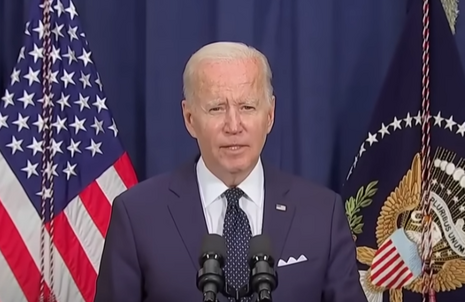 The Times Magazine published an asinine interview with leftist economist Herman Daly headlined: “This Pioneering Economist Says Our Obsession With Growth Must End.” “Growth is the be-all and end-all of mainstream economic and political thinking,” Times Magazine staff writer David Marchese wrote in the introduction section. “Without a continually rising G.D.P., we’re told, we risk social instability, declining standards of living and pretty much any hope of progress.”

What if, Marchese speculated, our “current pursuit of growth, rabid as it is, causing such great ecological harm, might be incurring more costs than gains?” [Emphasis added.]

The Atlanta Federal Reserve’s latest GDPNow estimate is that U.S. GDP contracted 1.5 percent in the second quarter, meeting the “practical definition of a recession” – two consecutive quarters of negative growth.

One of Daly’s main issues with America’s growth “obsession” was climate change.  Daly advocates for the green-infused philosophy of “steady-state economics.”

Marchese asked Daly his ideas about the need to “‘make ecological room.' But how do we know that our world is full and that we’re operating near the limits of the planet’s ecological capacity?” Daly spewed climate propaganda in response:

Marchese absurdly told Daly: “A lot of what you’re talking about has to do with getting humanity — from individuals to corporations to governments — to accept the idea of having ‘enough’ and that constraining the ability to pursue ‘more’ is a good thing.” This kind of economic nonsense sounds similar to when The Times published an essay praising sky-high inflation because it would supposedly make our diets more climate-conscious. [Emphasis added.]

Marchese’s interview is also a hard break from The New York Times' unfounded May claim that economic “Good Times Are Right Now” for millions of Americans, even as they struggled with spiking prices that ate into their wallets.

Now, per Marchese’s interview with Daly, the narrative appears to have shifted: Don’t be too upset about a contracting economy because we’re too obsessed with “growth” anyway. Marchese said in a footnote that “Daly and others have proposed replacing G.D.P. with the Index of Sustainable Economic Welfare (I.S.E.W.), which takes various negative values into account as well as positive ones,” with “negative values” including climate impact.

The Mises Institute defined Daly’s “ideal economy” as being “managed by wise government officials who don't allow resources to fall below ‘desired levels’ in reserve, and who restrain population growth with transferable ‘birth licenses’ sold to the public.”

Even NeverTrumper National Review contributing editor Jonah Goldberg slammed Daly’s economic views as “simply madness” and a “millenarian paranoia” that “should be familiar to anyone who’s heard the lament that capitalism is bad for the environment because it rapaciously consumes resources faster than they can be replaced.”

Conservatives are under attack. Contact The New York Times at 1-(800) 698-4637 and demand it stop trying to spin the narrative on America’s economic downturn.