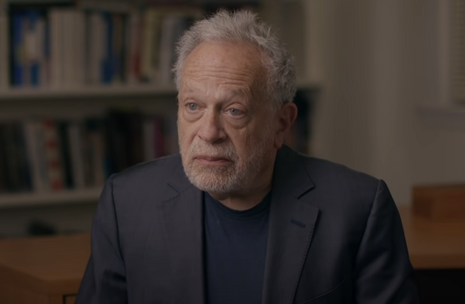 The American Prospect, of which Reich is founding editor, ran an April 8 article headlined, “Nationalize the U.S. Fossil Fuel Industry to Save the Planet.” Leftist economist Robert Pollin argued that “Turning the biggest oil companies over to public ownership would serve several goals at once, including climate resilience.”

This is the same Pollin who co-authored a book with radical philosopher Noam Chomsky pushing a “Global Green New Deal.” In his new article, Pollin exploited the release of the Intergovernmental Panel on Climate Change’s latest climate doom-mongering report to argue: “[W]e must begin advancing far more aggressive climate stabilization solutions than anything that has been undertaken thus far.”

Pollin said that his tyrannical idea “would entail the federal government purchasing controlling ownership of at least the three dominant U.S. oil and gas corporations: ExxonMobil, Chevron, and ConocoPhillips.” Why did Pollin cherry-pick these three companies in particular? He offered his explanation: “We could start with these giants because they are far larger and more powerful than all the U.S. coal companies combined, as well as all of the smaller U.S. oil and gas companies.” His so-called “straightforward” justification was actually pathetic: “The single most important factor causing climate change is that we continue to burn oil, natural gas, and coal to produce energy.”

Pollin demanded that “we must stop burning fossil fuels to have any chance of moving the global economy onto a viable climate stabilization path.” Did he forget that the U.S. is currently in an energy crisis largely because of the many restrictions placed on the industry?

But Pollin wouldn’t quit his absurd reasoning. He even suggested that the government enforce price controls on energy, which is ridiculous because of the sector’s high volatility. “The government could determine fossil fuel energy production levels and prices to reflect both the needs of consumers and the requirements of the clean-energy transition,” Pollin wrote. “This transition could also be structured to provide maximum support for the workers and communities that are presently dependent on fossil fuel companies for their well-being.”

CATO Institute adjunct scholar Jason Johnston wrote in 2017: “[T]he 100% renewables goal is yet another piece of progressive environmental rhetoric that in reality means higher costs for consumers and no improvement for the present environment.”

Conservatives are under attack. Contact The American Prospect at (202) 776-0730 and tell it to stop promoting a tyrannical government takeover of American fossil fuel companies.