Hostile Takeover on the Table? Elon Musk Opts Out of Twitter Board Seat 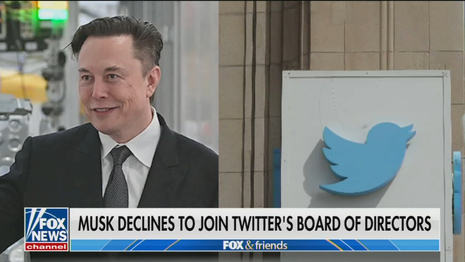 Tesla CEO Elon Musk declined a seat on Twitter’s board of directors after becoming the platform’s largest shareholder with a massive 9.2 percent stake. But this move could end up signifying an even greater play by Musk to seize control of the platform, according to CNBC.

Leftist Twitter CEO Parag Agrawal tweeted late April 10 that the world’s richest man “decided not to join our board.” Agrawal seemed to admit the quiet part out loud when he said that having Musk “as a fiduciary of the company where he, like all board members, has to act in the best interests of the company and all our shareholders, was the best path forward.”  Musk’s appointment was supposed to take effect April 9, “but Elon shared that same morning that he will no longer be joining the [B]oard. I believe this is for the best,” Agrawal claimed.

There could be another reason why Musk chose an about-face. He could attempt a hostile takeover of the company. According to CNBC, “If Musk had joined the board, he would not be able to acquire more than 14.9% of the company’s shares. Now that he’s no longer joining the board, he can theoretically increase his stake, should he wish to.” In addition, CNBC said “Some industry experts speculated on Twitter that he may now try to take over the company and rebuild it in the way that he wants to.” [Emphasis added.]

Elon has decided not to join our board. I sent a brief note to the company, sharing with you all here. pic.twitter.com/lfrXACavvk

Agrawal stated previously that the platform’s role was “not to be bound by the First Amendment,” but to decide “who can be heard.” In his latest update about Musk, Agrawal said the billionaire’s appointment to the Board was “contingent on a background check and formal acceptance.” But it sounds like Musk could be playing four dimensional chess against the leftist activists fighting to keep the platform's obsessive censorship in place.

Musk slammed the platform on March 26 for its censorship-heavy environment: “Given that Twitter serves as the de facto public town square, failing to adhere to free speech principles fundamentally undermines democracy.” Perhaps Musk is not satisfied with informing Twitter’s decision making, but instead could end up seeking control of the whole platform.

What should be done? https://t.co/aPS9ycji37