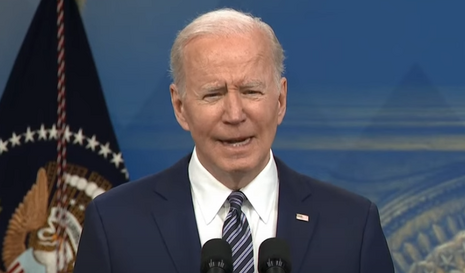 AP hedged in its fact-check by spinning that “Biden vastly overpromised Thursday when he told Americans they can expect savings of $500 a month by transitioning to renewable energy.” AP still brazenly attempted to salvage what Biden said by trying to act as the White House public relations team: “It’s possible they might save that much over a year, not per month.” AP even tried to peddle its cushioned fact-check on Twitter: “An AP Fact Check shows he misspoke.”

President Joe Biden has told Americans they could save $500 a month by transitioning to renewable energy. An AP Fact Check shows he misspoke. The White House actually claims that using green energy might save people $500 a year, not per month.https://t.co/WB6tckyj1A

But aside from the bold-faced falsehood Biden told, even The New Yorker’s leftist editor David Remnick suggested in an August 2021 interview with Biden’s climate czar John Kerry that transitioning to green energy would cost Americans. “Transitioning to renewables is going to cost trillions of dollars and upend huge industries. We’re likely to have to eat less meat, use more public transportation,” said Remnick. Meanwhile, Blaze Media mocked AP on Twitter for its lackluster critique of Biden: “When Democrats get fact checked it's because they ‘misspoke.’”

When Democrats get fact checked it's because they "misspoke" https://t.co/qqPm7M88qa

But even AP couldn’t effectively protect Biden from his own folly. Biden reportedly claimed: “‘If your home is powered by safer, cheaper, cleaner electricity like solar or heat pumps, you can save about $500 a month on average.’” AP retorted: “THE FACTS: Not so. The average person in the U.S. spends far less than that every month on electricity.’”

The Heritage Foundation Research Fellow Katie Tubb cut through the gaslighting and summed up the cost of Biden’s green energy extremism:

[Biden] presses on advancing costly policies that ultimately will eliminate conventional fuels by regulatory fiat. This should be no surprise—this self-imposed energy scarcity is exactly what Biden promised on the campaign trail when he told voters, ‘Look into my eyes: I guarantee you we’re going to end fossil fuels.’

CATO Institute Adjunct Scholar Jason Johnston wrote in 2017: “[T]he 100% renewables goal is yet another piece of progressive environmental rhetoric that in reality means higher costs for consumers and no improvement for the present environment.” [Emphasis added.]

Conservatives are under attack. Contact the Associated Press at 212-621-1500 and demand the outlet be straightforward about Biden’s deceptive statements.