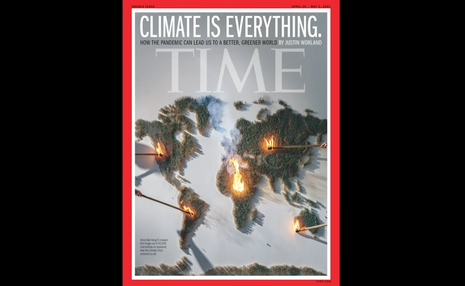 The eco doom-mongering TIME magazine virtue-signaled that the U.S. needs to fight climate change if it's serious about fighting inflation. Really.

The rag published a bonkers Feb. 3 article headlined, “If the U.S. Wants to Fully Tackle Inflation, It Needs to Tackle Climate Change.” After blaming consumers in part for driving the worst inflation seen in nearly 40 years, along with supply shortages caused by the COVID-19 lockdowns, the magazine started babbling nonsense.

“[B]eneath the headlines economists say that extreme weather events tied to climate change are also contributing to inflation. Across the world, climate-linked disasters have killed crops, disrupted energy supplies, and crippled transportation lines. Economists say that this reality will only worsen as the planet warms.” The magazine has a long, sad history of trying to push end-of-the-world narratives and tying climate change to unrelated issues like inflation.

TIME looks like it’s trying to live up to the propaganda it pushed in April 2021: “Climate Is Everything.”

Of course, TIME suggested an unhealthy dose of government intervention to deal with its climate boogeyman: “There’s no question that governments need to do more to combat climate change—to halt the extreme weather events that drive inflation, yes, but also just to save lives and keep society from collapsing.” However, the magazine undercut itself by admitting that its proposal would actually cause, er, inflation:

At the most basic level, it’s easy to understand how climate policy might drive up prices. Indeed, the entire point of carbon pricing and regulatory schemes is to increase the costs of emitting carbon. And, because today’s economy largely runs on carbon-based fuels, these policies might mean higher prices of goods in the short term while manufacturers find less carbon intensive ways of doing business, [emphasis added].

Specifically, “First, companies have to pay more for CO2 emissions. They incur further costs because the higher CO2 price leads them to reorganise their production in a climate-friendly way.” The fact that TIME conceded this blows a hole through its propaganda.

Tying inflation to climate change is as nonsensical as when TIME tried to scare readers about a global cooling catastrophe over 47 years ago. “The trend [of global cooling] shows no indication of reversing,” TIME reported in 1974.  “Telltale signs are everywhere —from the unexpected persistence and thickness of pack ice in the waters around Iceland to the southward migration of a warmth-loving creature like the armadillo from the Midwest.”

In 2020, the magazine claimed 2020 was the planet’s “one last chance” to save the planet from global warming. It’s a wonder why anyone would take TIME seriously on anything related to climate change.

Conservatives are under attack. Submit a letter to the editor at Time (letters@time.com) and demand the publication stop pushing climate propaganda.