The Washington Post tried to whip out the generic “Republicans have pounced” cliché in order to spin some of the attention on skyrocketing prices away from President Joe Biden. 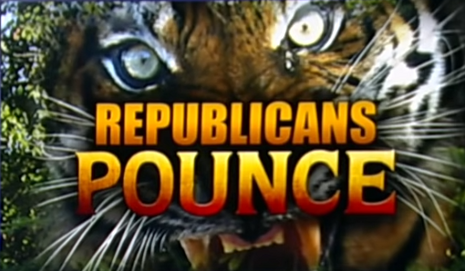 The liberal newspaper released a revealing story headlined, “Inflation emerging as top economic challenge in 2022.” Strong consumer demand in addition to ongoing supply chain problems “threaten to prolong sharply rising prices well into 2022, potentially making inflation the premier economic challenge of the new year.” The Post conceded that inflation “defied many economists’ expectations in 2021 by rising at the fastest pace in nearly 40 years,” and that “[e]verything from rent to the price of used cars to groceries” had spiked.

Then The Post tried to make the Biden economy look like a victim of GOP political exploitation: “[T]he White House will be looking at a midterms campaign in which Republicans are primed to pounce on inflation.” [Emphasis added.]

Now, says The Post, companies and economists performed an about-face and are expecting inflation to continue into the new year. According to The Post:

[Soaring inflation] caused pain for consumers — eating into sizable wage gains. It also caused headaches for the Federal Reserve, which had forecast much less inflation, and the White House, which faced concerns even from some Democrats about whether plans for more federal spending would drive inflation higher still.

RSM Chief Economist Joe Brusuelas told The Post that “Regardless of how you look at it, inflation is going to be with us for a good period of time.” The Post even undercut reporting by The Associated Press, which tried to insert a weak silver lining into the awful November inflation numbers in a Dec.12 story headlined: “Inflation is painfully high, but some relief may be coming.” In The Post’s latest estimation, “The beginning of the year is unlikely to bring much relief.” It continued: “After a punishing year of food price increases for consumers, 2022 is unlikely to look much better.”

It makes sense in the face of such terrible economic news why The Post would attempt to portray Biden as a victim and attack the GOP. The newspaper has been teeter-tottering between red pill and blue pill moments on Biden’s economy throughout the entire year. In April, The Post tried to prop up Biden’s atrocious economic agenda in a piece headlined, “A majority of Americans support ‘Bidenomics.’ The pandemic changed minds dramatically.”

In June, The Post attempted to downplay rising inflation in a “FAQ” piece by calling it a “yellow traffic light situation. People are on alert, but there’s no panic or slamming of brakes.” The newspaper would later concede in a piece in October that “uncomfortable inflation” was “changing the economy.” But that was before it released another story later in November headlined, “The Biden economy is doing pretty well by the measures Trump used to evaluate his own.”

Now, the angle has once again shifted to “Republicans Pounce!” So much for neutrality.