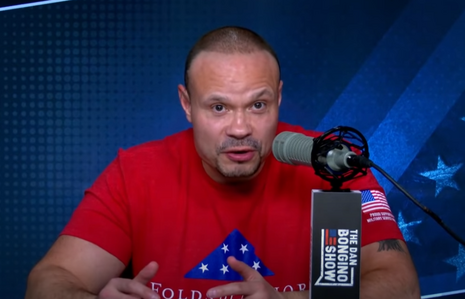 The profile, headlined “Dan Bongino and the Big Business of Returning Trump to Power,” had the audacity to connect the radio host to the Capitol Hill Riot. “Spend several months immersed in American talk radio and you’ll come away with the sense that the violence of January 6th was not the end of something but the beginning,” staff writer and CNN contributor Evan Osnos groaned.

After noting how Bongino’s Facebook page alone “has attracted more engagement than those of the Times, the Washington Post, and the Wall Street Journal combined,” Osnos cited Texas A&M University professor Jennifer Mercieca to attack Bongino: “Mercieca describes Bongino as ‘an important node in the amplification of propaganda.’”

In other words, if you’re a successful conservative figure in the media, be prepared for leftist publications to throw mud at you in the hopes that something sticks and ruins your image.

Osnos continued the attack and accused Bongino of helping foster an aura of violence among fans:

The moment captured the perils of living in a nation beset by information warfare: if January 6th made anything clear, it was that some number of Americans will eventually abandon a distinction between rhetorical battle and the real thing. Bongino’s business thrives in that borderland, the realm of thinking where the best way to stay safe is to buy the shotguns and holsters that he advertises on his show, [emphasis added].

But wait, there’s more! Osnos even tried to pin the killing of Ashli Babbitt during the Capitol Hill Riot on Bongino. “[Bongino] wrote that conservatives were being ‘put on targeting lists’ and that his opponents were ‘tyrants, nothing more.’ Less than a week later, he wrote, ‘The mask is off. They’re not hiding anymore,’” Osnos wrote. Then came the kicker: “One of the people reading, according to an analysis by National Public Radio, was Ashli Babbitt, a devoted Trump fan from Southern California. On January 6th, she was killed by police while trying to storm the Capitol. In the last year of her life, Babbitt retweeted Bongino at least fifty times.” [Emphasis added.]

Bongino reportedly snapped back as Osnos was preparing his write-up. After Bongino slammed a magazine memo as containing “obviously false material,” Bongino then later reportedly ripped Osnos on his podcast: “‘[Y]ou ass-kissing-Biden, surgically-attaching-your-lips-to-the-ass-of-the-Administration piece of garbage.’”

Bongino certainly has reason to be angry, given Osnos’ sleazy attempt to make him look like an instigator behind the events of Jan. 6. Journalist Glenn Greenwald also slammed The New Yorker’s character assasination of Bongino in a tweet: “One last point about the formulaic Bongino profile: it used to be that a @TheNewYorker hit piece by a CNN writer would be harmful. Now: it doesn't matter. They've so whittled their credibility that the targets of their smears have larger audiences than they, making them impotent.”

Conservatives are under attack. Contact The New Yorker at (800) 444-7570 and demand the magazine retract its connection of Bongino to the Capitol Hill Riot.