Brent Bozell Stands with Dan Bongino Against Vaccine Mandates: ‘This Is About Freedom’ 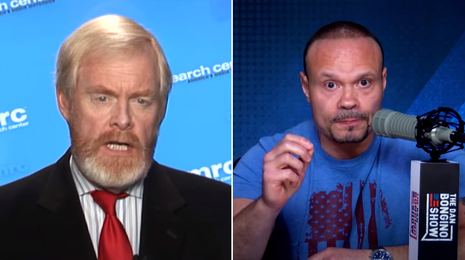 Bongino hammered Cumulus Media — his show’s partner — during the Oct. 18 edition of The Dan Bongino Show on Fox Nation. The company had recently instituted a draconian vaccine mandate against its workers. The mandate reportedly led to firings at Cumulus. Bongino called the move by Cumulus “stupid” and leveled an ultimatum against the media company. “You can have me, or you can have the [vaccine] mandate. But you can't have both of us,” Bongino said. Bozell took to Twitter to express his solidarity within Bongino: “I'm vaccinated, but I stand with anyone with a moral or medical objection to the vaccine. This is about freedom. We should be free to take the vaccine or not. #StandWithDan.”

The popular radio host had a sharp response for the actions by Cumulus: “I’m not playing along with that. And I’ll invite, by the way, any of those hosts who — according to an article I read today in Inside Radio who had been let go because of it — you’re welcome to come on the show.”

I'm vaccinated, but I stand with anyone with a moral or medical objection to the vaccine. This is about freedom. We should be free to take the vaccine or not. #StandWithDan https://t.co/fOAzcC2zTr

Bongino didn’t let up, and said that vaccination mandates were “antithetical to everything I believe in, my company believes in, I believe in myself, my wife believes in and anyone associated with my company.”

He then declared, “I’m not going to let this go,” and went right at his partnership with Cumulus media: “You have a choice. I work with you. I do not work for you. I never will. You may have had other people in a corner, but you don’t have me. And it’s my obligation — given everything I’ve been through health-wise — it’s my obligation to stand up for them.”

Bongino had battled Hodgkin’s Lymphoma earlier this year before announcing a clean bill of health in March.

Bongino also noted that a lot of Cumulus employees had their entire livelihoods “at risk. I don’t know if you cared about that or you just disregarded it. I don’t know. What? Did you have a personal consultation with Fauci or something? They tell you how valuable these mandates are?”

It was unclear what led Cumulus Media into the “mistaken belief that I was just going to sit back and take this and let these people wither on the vine. I’m not,” Bongino declared.

Conservatives are under attack. Contact Cumulus Media at ContactUs@cumulus.com and demand the company rescind its vaccine mandate. Also, share this story on social media with the hashtag #StandWithDan to show support for Bongino’s fight.