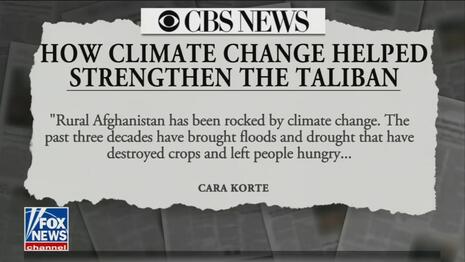 CBS News climate and energy reporter Cara Korte wrote an absurd story headlined: “How climate change helped strengthen the Taliban.” She decried that “Rural Afghanistan has been rocked by climate change,” before making the wild connection that “the Taliban — likely without knowing climate change was the cause — has taken advantage of that pain.”

But CBS News was singing a different tune 6 years ago when it blamed “opium profits” — not climate change — for strengthening the Taliban in a 2015 story headlined: “Taliban set to double opium profits this year?” CBS News said in 2015 that the Taliban derived 40 percent of its funding from the illicit opium trade, which “fuel[ed] their insurgency.” Climate change wasn’t even mentioned in the 2015 story. Talk about a whopping narrative shift. [Emphasis added.]

Korte ignored mentioning the “billions” in profits the Taliban made off of its illicit drug trade until the seventeenth paragraph of her story. But she blamed the opium trade on the false narrative that farmers were struggling to produce other crops and climate change. Korte said in the first paragraph of her piece that the Taliban derived its strength from three decades of “floods and drought” that have “destroyed crops and left people hungry.” But this isn’t true. Heartland Institute President James Taylor used United Nations Food and Agriculture Organization cereal crop yields (corn, wheat, and rice) data to upend the propaganda from CBS News: “Afghanistan has fully doubled its crop yields during the past three decades.” He continued: “Also, Afghan farmers have set new production records on a regular basis, especially during the past few years.”

Climate Depot Founder Marc Morano joined Tucker Carlson Tonight on Fox News Aug. 20 to also go after CBS News for using climate nonsense to shift blame away from Biden’s blunders. “There’s no end to which the media and academia will not defend progressives and Democrats in power using climate,” Morano stated.

Conservatives are under attack. Contact CBS  News at (212) 975-3247 and demand it stop arbitrarily shifting blame for the Afghanistan terror crisis away from Biden and toward so-called climate change.