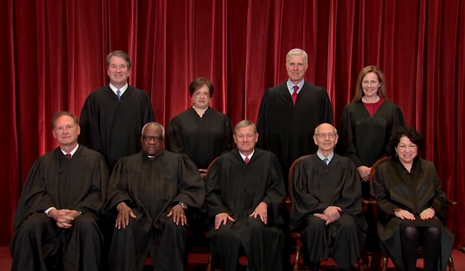 Chief Justice John Roberts wrote the opinion of the Court in Americans for Prosperity Foundation v. Bonta, Attorney General of California. The syllabus for the opinion reasoned that “California’s disclosure requirement imposes a widespread burden on donors’ associational rights.” It continued: “[T]his burden cannot be justified on the ground that the regime is narrowly tailored to investigating charitable wrongdoing, or that the State’s interest in administrative convenience is sufficiently important.” Leftists on Twitter went berserk.

Journalists called the decision everything from a punch “to democracy” to a move that made “dark money even darker.” This is despite the fact that liberal groups like the NAACP Legal Defense and Education Fund were in support of the challenge to California’s law.

Leftist Slate Staff Writer Mark Joseph Stern spewed that the SCOTUS decision was one of “two gut punches to democracy.” He even went as far to propagandize that the Voting Rights Act of 1965 was in danger as a result of SCOTUS’s decisions.

The Supreme Court closes out its term with two gut punches to democracy. Americans for Prosperity is as bad as it could possibly be. Brnovich is not the worst-case scenario, but it is still very, very bad. The Voting Rights Act is in grave peril at SCOTUS. Both 6–3 decisions.

The New Yorker Staff Writer Jane Mayer fearmongered that the conservative justices on the Supreme Court made “dark money even darker.”

In a case brought by the Kochs’ political arm- Americans For Prosperity- the Court’s conservatives just made dark money even darker. https://t.co/yoTgSiQXKq

Writer and Producer Rob St. Mary bellowed after the SCOTUS decision was released: “Fan-fucking-tastic!” He then proceeded to flail, “Burn it all down.”

So money is "free speech" but you can't know who is saying said "speech"?

Burn it all down. https://t.co/YAnwFYmnT2

Sen. Sheldon Whitehouse (D-RI), who’s extremely hypocritical when it comes to his faux outrage against dark money, also attacked the Court for allegedly being corrupted by dark money: “The Court That Dark Money Built just built dark money a home in our Constitution. A dark, dark day for democracy.”

The Court That Dark Money Built just built dark money a home in our Constitution. A dark, dark day for democracy. https://t.co/X1wGZgjcqL

The New York Times tweet of its story on the case made it appear as if the only groups SCOTUS was siding with were “conservative.” Newsflash to The Times: Liberal groups like the NAACP Legal Defense and Education Fund, the American Civil Liberties Union (ACLU) and the LGBTQ-focused Human Rights Campaign had filed a brief earlier this year supporting the case against California’s law.

Breaking News: The Supreme Court rejected California’s requirement that charities report the identities of major donors, siding with conservative groups who said the disclosures could lead to harassment. https://t.co/lU6a9z32EA

The irony is that The Times even noted in its story that the liberal NAACP Legal Defense and Education Fund and the ACLU were supporting the challengers in the case.

The left has made it clear that they’re willing to trample on the First Amendment just so they can attack donors who give to groups they hate.

Conservatives are under attack. Contact The New York Times at 800-698-4637 and demand it amend its tweet to mention that liberal groups were also supporting the repeal of California’s draconian donor disclosure law.