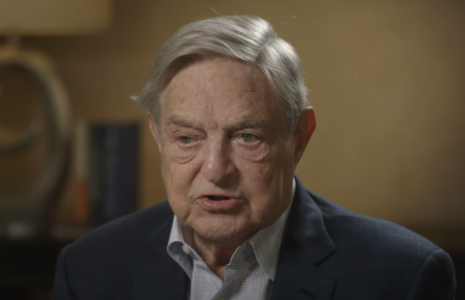 The Times propagated how Data for Progress, a pro-Green New Deal and Medicare-for-All group, “has grown comfortable with mainstream influence.” The group is a project of the dark money group Tides Advocacy. The story, headlined “Born on the Left, Data for Progress Comes of Age in Biden’s Washington,” championed how “President Biden mentions it in private calls. The White House reads its work. And Senator Chuck Schumer, the majority leader, teams up with its leaders for news conferences, blog posts and legislation.” Soros’s Open Society Foundations funded Tides Advocacy with at least $4,485,000 between 2017 and 2019.

The newspaper didn’t even bother to mention Data for Progress’s ties to Tides Advocacy or that its parent organization was funded by Soros. Instead, The Times pushed how “[t]he embrace of Data for Progress by the highest ranks of the Democratic Party is a coming-of-age moment for a left-leaning polling firm and think tank that is barely three years old.”

The Times story read like a Data for Progress press release:

Part of the group’s early success reflects a Democratic Party that shifted to the left during the Trump era. But it also signifies the maturing of a new generation of liberal activists, who are grappling with how to wield political power when they’re no longer the opposition, [emphasis added].

The newspaper wasn’t finished propping up the extremist group’s political bona fides. The Times continued: “For Data for Progress, the strategy is Politics 101: Politicians like policies that are popular.” It’s interesting that nowhere in the piece does The Times mention that Data for Progress has backed extremist policy agendas like the Green New Deal and Medicare-for-All.

But that’s not all. Data for Progress Executive Director Sean McElwee is also the co-founder of the extremist group Abolish Ice. Influence Watch noted that “[Abolish Ice] advocates for a de facto open-borders immigration policy and demands the termination of U.S. Immigration and Customs Enforcement (ICE).”

Apparently, advocating for extremist policy positions wasn’t enough for Data for Progress. The organization even dabbles in woke ideology. Its entire “team” page is inundated with the preferred gender pronouns of its staffers.

The newspaper seemed concerned only with getting McElwee to divulge his group’s secrets to political success.“‘The secret sauce here is that we’ve developed a currency that they’re interested in,” McElwee told The Times. “‘We get access to a lot of offices because everyone wants to learn about the numbers.’”

Conservatives are under attack. Contact The New York Times at 800-698-4637 and demand it report on Data for Progress’s connections to Soros.