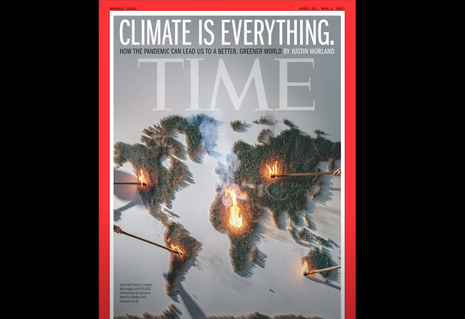 The magazine released a new cover story with a headline that once again reeked of climate Armageddon agitprop: “Climate Is Everything: How the pandemic can lead us to a better, greener world.” Climate doom-monger and Time senior correspondent Justin Worland laced the story with absurd propaganda: “[S]purred by alarming science, growing public fury and a deadly pandemic, government officials, corporate bosses and civil-society leaders are finally waking up to a simple idea whose time has come: climate is everything.”

It’s interesting that a new analysis published a day after Worland’s story by scientists from the Massachusetts Institute of Technology and Princeton University was headlined: “Climate ‘Emergency’? Not So Fast.” Meteorologist Richard Lindzen and physicist William Happer argued that “[t]here is no climate emergency. Americans should not be stampeded into a disastrous climate crusade.” The authors said that “[a] climate crusade that destroys economies and ultimately lives will be as bad, or worse [than the medieval crusades].”

Worland praised U.S. Department of Housing and Urban Development Secretary Marcia Fudge for “working to infuse climate considerations into everything [President Joe Biden’s] Administration does.” Worland heralded how “[t]he intertwining of the economy and climate change promises to shape global politics and society for the foreseeable future.”

Worland’s story read like the same kind of false alarmism that Time peddled when it tried to scare readers about a global cooling catastrophe nearly 47 years ago. In 1974, Time said: “The trend [of global cooling] shows no indication of reversing … Telltale signs are everywhere —from the unexpected persistence and thickness of pack ice in the waters around Iceland to the southward migration of a warmth-loving creature like the armadillo from the Midwest.” On a similar note, Worland tried to convince readers recently that 2020 was the world’s “one last chance” to save the planet.

Worland appeared to champion how the pandemic shifted conversations toward climate change and led governments to infuse policy-making with eco-extremist nonsense. He wrote:

"When COVID-19 hit, the climate conversation at first took a back seat as hospital beds filled. But in the midst of the crisis, interest seemed only to grow as the pandemic reminded people of the risk of ignoring science and the world’s interconnectedness."

Worland even cited climate fanatic and former Vice President Al Gore, who said: “‘The world is crossing the long-awaited political tipping point on climate right now … We are seeing the beginning of a new era.’” Of course, Worland didn’t mention that Gore has a long history of being wrong on many of his climate predictions.

Conservatives are under attack. Submit a letter to the editor at Time (letters@time.com) and demand the publication stop pushing climate propaganda.