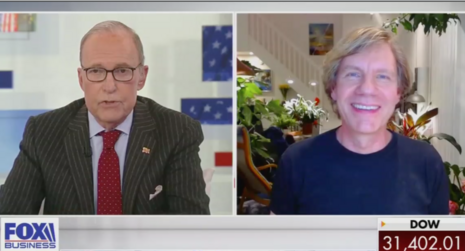 Lomborg told Fox Business host Larry Kudlow that there’s “a lot of hype going on with climate change.” He suggested that there has been a lack of a sense of proportion when it comes to the focus on climate change. Specifically, Lomborg stated that “the U.N. Climate Panel tells us that in the 2070s — so, more than 50 years from now — the net impact of global warming will be equivalent to each one of us losing [only] somewhere between 0.2 and two percent of our income.”

Lomborg put the astonishingly low threat estimates into context: “By then, [the 2070s,] we’ll be 364 percent as rich as we are today as a planet. So, instead of being 364 percent as rich, we’ll only be 356 percent as rich.” Lomborg concluded: “Yes [climate change is] a problem. No, it’s not the end of the world.”

The estimates matter, Lomborg said, “because when Biden is telling us, ‘This is an existential crisis,’ that’s the reasoning behind that we should be spending.” In addition, Lomborg called out Biden for wanting to spend “$500 billion every year on fixing climate. That’s $1,500 per person in the U.S every year. That’s just not going to happen, and it’s not sustainable because people are not willing to pay that amount of money.”

Watch the FBN interview below:

Lomborg also took time to address the draconian Paris Climate Agreement. He assessed that “everybody sort of congregates around Paris as if this was the solution to climate change.” But, as Lomborg noted, “the U.N. organizers of the Paris Climate Agreement themselves point out that this will do less than one percent of what politicians actually are promising.”

Lomborg assessed that “If everyone did everything they promised at Paris, the net impact would be to reduce temperatures by the end of the century by an immeasurable 0.05 degrees Fahrenheit.”

Let’s just be honest. Paris, by itself, will actually be fairly costly. It’ll cost one to two trillion dollars a year, and it’ll have virtually no impact, even in 80 years time. We need a smarter approach if we’re actually going to fix the real problem of climate.