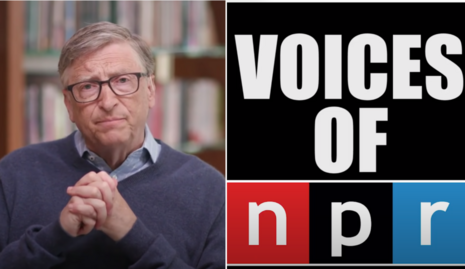 The grantmaking foundation of climate change fanatic Bill Gates has still been dumping millions of dollars into the taxpayer-funded National Public Radio.

This alone should be enough cause to revoke the outlet’s public funding.

Foundation Directory Online (FDO) data reveal that the Bill & Melinda Gates Foundation had given at least $4 million to National Public Radio (NPR) in 2020 alone. This is on top of the $14,164,937 the Gates Foundation had given NPR between 2003-2019. It is worth noting that Gates had just recently called for a radical transformation of the global economy into a green utopia: “[A]n all-out effort — you know — like a world war, but it’s us against greenhouse gases.” The Gates Foundation had also contributed $81,009,329 to the abortion mill Planned Parenthood and its affiliates from 2009 and before to 2018. The fact that such extremism on abortion and climate change are connected to a taxpayer-funded news outlet is grotesque.

FDO summarized the purpose of the $4 million grant by the Gates Foundation:

To support high-quality, evidence-based, and sustained coverage of global health and development issues including as affecting the world's poorest and most vulnerable people.

NPR’s On The Media show used a Feb. 5 episode broadcasted on 400 public radio stations across the country to attack Fox News. The episode was headlined, “Slaying the Fox Monster.”

In January, 2021, NPR pivoted off of President Joe Biden’s election to argue that his presidency could potentially change the Catholic Church’s pro-life stance:

[F]or those who would like to see the church take a more permissive stance on issues including abortion, Biden's election is an opportunity.

NPR pushed a story in June, 2020 on how Planned Parenthood was backing then-candidate Joe Biden in a “‘life and death election.’”

NPR talk show Here and Now ran a segment in March, 2020 promoting the coronavirus fear-mongering of “pandemic expert” Laurie Garrett. Garrett’s armageddon screeching in the interview can be summed up in a single quote:

[I]f people still don’t understand they need to have social distancing, then I don’t think we have any hope at all, I think we’re all gonna drop dead.

NewsBusters Executive Editor Tim Graham had noted that NPR’s suggestion that its taxpayer funding is minuscule was misleading: “We like the hashtag #DefundNPR, but that means removing its taxpayer subsidies, which they always implausibly claim is some minuscule fraction like two percent.”

Seventy-five million in tax dollars was inserted by Democrats into the emergency coronavirus stimulus bill in 2020 to maintain NPR and PBS radio stations. The $75 million cost Americans the equivalent of things like “300,000 Covid-19 test kits” or “4,166 ventilators.”