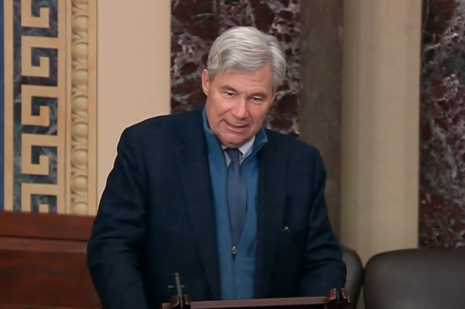 Axios climate change and energy reporter Amy Harder praised how Senator Sheldon Whitehouse (D-RI) was “calling on the incoming Biden administration to have the Justice Department investigate organizations that fossil-fuel companies have in the past funded.” Harder said Whitehouse was accusing these organizations of “propagating ‘climate denialism and climate obstruction and political ownership of the Republican Party.’”

Harder herself took aim at the conservative Heartland Institute, reportedly a Whitehouse target, and attacked it as “an organization known for pushing false information on climate change.” She stated that Whitehouse’s “focus for now at the federal level are organizations like Heartland.”

Nowhere did Harder mention Whitehouse’s hypocrisy on special interest funding when it comes to his own connections to dark money. The Capital Research Center (CRC) reported in November that Whitehouse himself “fundraises through ActBlue, the Left’s favorite ‘dark money’ machine.” CRC said that ActBlue’s “501(c)(3) and (c)(4) wings report their pass-through grants as a single, unidentifiable lump, so they don’t have to disclose which groups they passed money to or how much each group received.” In addition, Harder also ignored how Whitehouse had written an opinion piece for The Washington Post in 2015 actually arguing for RICO lawsuits to be brought against companies who disagreed with him on climate change.

Reporting any of Whitehouse’s connections to dark money or his crazy op-ed promoting RICO suits against companies he disagrees with would have undercut the anti-special interest and purist crusader images of Whitehouse that Harder was trying to push.

The Wall Street Journal Editorial Board published an editorial in September headlined “Sheldon Whitehouse Goes Dark.” Whitehouse was invited to testify before a House Judiciary subcommittee to rail against right-wing “grimy swamps of dark money influence” on the courts, The Journal noted. He reportedly did this while refusing to answer questions about his own ties to Arabella Advisors. Arabella Advisors is a massive left-wing for-profit operation that oversees leftist nonprofit groups that have also tried to exert considerable influence on the courts. As the editorial concluded:

Mr. Whitehouse’s silence about his own ties to dark-money networks shows his goal isn’t to clean up politics. He wants to silence those who disagree with him, [emphasis added].

The Journal Editorial Board also noted prior to Whitehouse’s testimony before the House Judiciary subcommittee that Whitehouse had possible “ties to [the radical leftist] Demand Justice, which describes itself as a ‘project’ of the [Soros-funded dark money organization] Sixteen Thirty Fund and New Venture Fund. In 2018, Demand Justice spent some $5 million opposing Brett Kavanaugh.”

Demand Justice — an “affiliate” of Arabella Advisors — was reported in September to be spending seven figures on an ad buy in a last-ditch effort to derail President Donald Trump’s nomination of Amy Coney Barrett to the Supreme Court. The Journal reported that “[w]hen a Daily Caller reporter asked Mr. Whitehouse last year if Demand Justice and groups like it have donated to his campaign, the Senator replied, ‘hope so.’”

I've been interviewed by Axios' Amy Harder. I don't view her as an objective reporter. She's a propagandist for climate bedwetting, masquerading as a journalist. None of this was a surprise since Axios itself is basically a spinoff of the left-wing Politico. That she would omit mention of Sen. Outhouse's [Whitehouse] hypocrisy is no surprise.

Conservatives are under attack.  Contact Axios and demand that Harder update her story to disclose Whitehouse’s glaring hypocrisy on special interests.