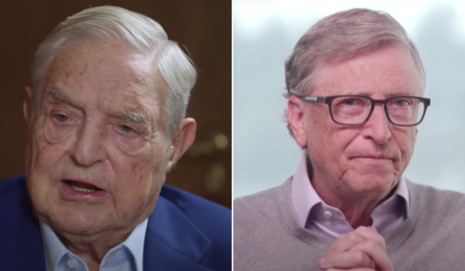 Liberal billionaire George Soros had said the pandemic was providing a “revolutionary moment.”

Now Project Syndicate (PS), a group both Soros and fellow liberal billionaire Bill Gates fund, is peddling a tyrannical proposal. Specifically, the group is pushing an eco-extremist idea that the world may need a “climate lockdown” to preempt climate change unless we have a “green economic transformation.”

In a piece headlined “Avoiding a Climate Lockdown,” author Mariana Mazzucato propagandized that “The world is approaching a tipping point on climate change, when protecting the future of civilization will require dramatic interventions.” According to Mazzucato, “Avoiding this scenario will require a green economic transformation – and thus a radical overhaul of corporate governance, finance, policy, and energy systems.” Then came the scary dystopianism: “In the near future, the world may need to resort to lockdowns again – this time to tackle a climate emergency” — and COVID-19 set the precedent. [Emphasis added.]

George Orwell is turning over violently in his grave.

Mazzucato then broke down what she meant by what she called a  “climate lockdown,” and it was just as crazy as the term itself:

Under a ‘climate lockdown,’ governments would limit private-vehicle use, ban consumption of red meat, and impose extreme energy-saving measures, while fossil-fuel companies would have to stop drilling. To avoid such a scenario, we must overhaul our economic structures and do capitalism differently. [Emphasis added.]

The author also tried to exploit the virus and connect it to her sensationalizing of a climate change Armageddon: “Many think of the climate crisis as distinct from the health and economic crises caused by the pandemic. But the three crises – and their solutions – are interconnected.”

For Mazzucato, “The window for launching a climate revolution – and achieving an inclusive recovery from COVID-19 in the process – is rapidly closing.” She continued, selling the false, unicorn-like idea of a “green good life”: “We need to move quickly if we want to transform the future of work, transit, and energy use, and make the concept of a ‘green good life,’ a reality for generations to come.” [Emphasis added.]

Gates himself tried to arbitrarily pivot off of the coronavirus to fear-monger about climate change in a blog headlined, “COVID-19 is awful. Climate change could be worse.” In the blog, Gates pushed radical eco-extremism: “[T]he fact that dramatically higher temperatures seem far off in the future does not make them any less of a problem—and the only way to avoid the worst possible climate outcomes is to accelerate our efforts now.” He continued: “ Even as the world works to stop the novel coronavirus and begin recovering from it, we also need to act now to avoid a climate disaster by building and deploying innovations that will let us eliminate our greenhouse gas emissions.” [Emphasis added.]

Soros told Italian newspaper La Repubblica in an interview that he described the virus as “a revolutionary moment when the range of possibilities is much greater than in normal times,” according to The Washington Times. Soros continued: “'What is inconceivable in normal times becomes not only possible but actually happens. People are disoriented and scared.'” [Emphasis added.] The Times summarized that Soros hoped “that the COVID-19 crisis has opened up politics in a radical direction.” [Emphasis added.]

That “revolutionary moment” may include Soros, Gates and others using their monetary influence to fund radical groups that are exploiting the coronavirus to push the world into adopting a green utopia.