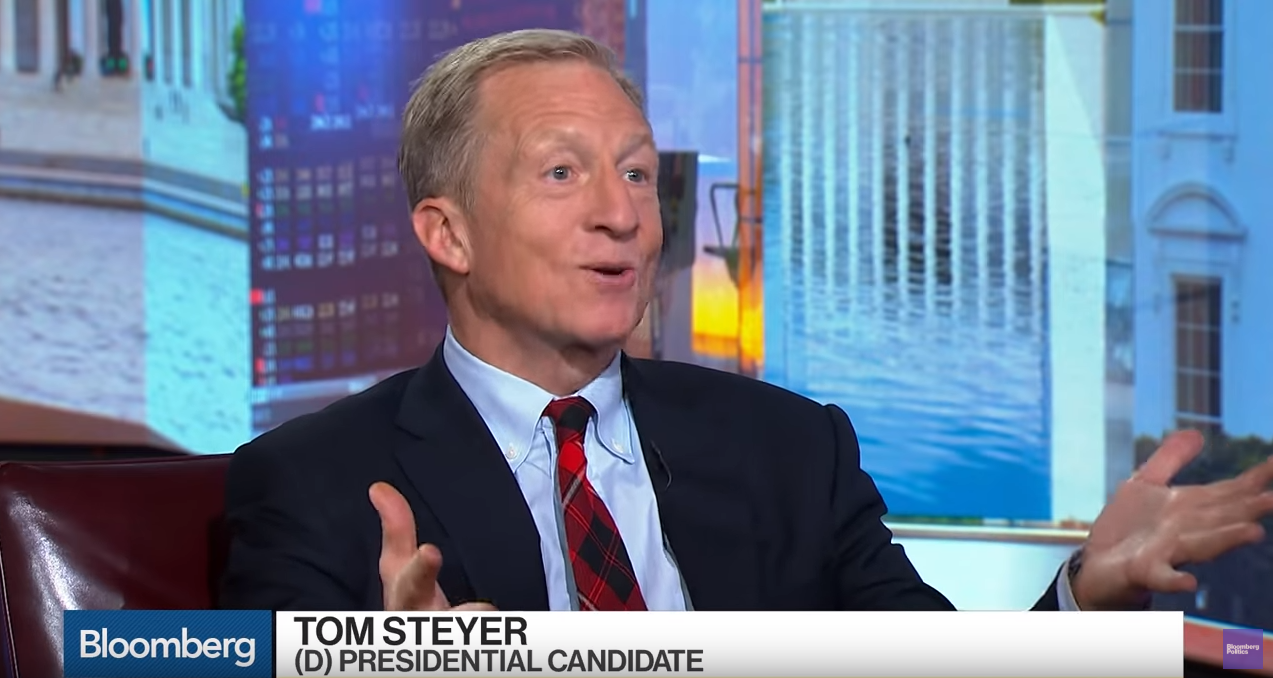 The Hill reported Oct. 7 one of Steyer’s biggest ambitions in his economic plan: “Steyer, a billionaire philanthropist, calls to repeal Citizens United, the 2010 Supreme Court case that allowed for unlimited spending on campaigns.”

That’s rich coming from the same billionaire that had just spent $120 million last year pushing impeachment. He promoted Democratic Party candidates to take back control of the House of Representatives and remove President Donald Trump from office. The Hill didn’t mention any of this “unchecked capitalism” in their reporting.

The Hill also failed to mention that before announcing his bid for the presidency, OpenSecrets ranked Steyer as the third-highest federal contributor for 2018, with nearly $74 million in donations going exclusively to liberal candidates, PACs and causes. So much for stopping “unlimited spending on campaigns.”

Steyer is currently Open Secrets’ top contributor to outside spending groups for 2019-2020. He has already contributed $21,063,557 to liberals, outspending eight of the top conservative donors during the same period.

Rather than hold up each of Steyer’s policy proposals to some measure of journalistic scrutiny, The Hill simply gave a basic FAQ sheet of Steyer proposed and avoided criticizing him at all.The Hill outlined Steyer’s support for a controversial mandatory minimum wage increase to $15 per hour.

A mandatory minimum wage would force businesses “to raise prices (which can lower business volume) or cut costs,” The Heritage Foundation critiqued Jan. 23, “The latter is done through layoffs, reducing workers’ hours or benefits, raising prices, or forgoing investments in the business.” Heritage further noted, “None of those things is good for workers or the business’s long-term success.”

Other Steyer policies iterated in The Hill’s unqualified report were: support for a one percent wealth tax on anyone’s net worth that exceeded $32 million (Steyer’s net worth is $1.6 billion) and two years of free college. National Review said March 19, 2018, that free college would “reduce motivation, distort the education market, and often end up reducing students’ motivation.”

Lastly, The Hill echoed Steyer’s plan to declare a climate emergency on day one of his presidency.

His “climate emergency” declaration will precede the immediate implementation of his “Justice-Centered Climate Plan,” which calls for all United States to ensure that “our homes, hospitals, universities, businesses, transportation systems, manufacturing, and agriculture operations are powered with 100% clean energy.”

Steyer clarified his eco-extremist position further, saying, “It is critical to end our dependence on fossil fuels and drive all forms of global warming pollution to net-zero by 2045.”

The Hill also ignored that Steyer has a record for investing millions into coal production through his hedge fund Farallon Capital.