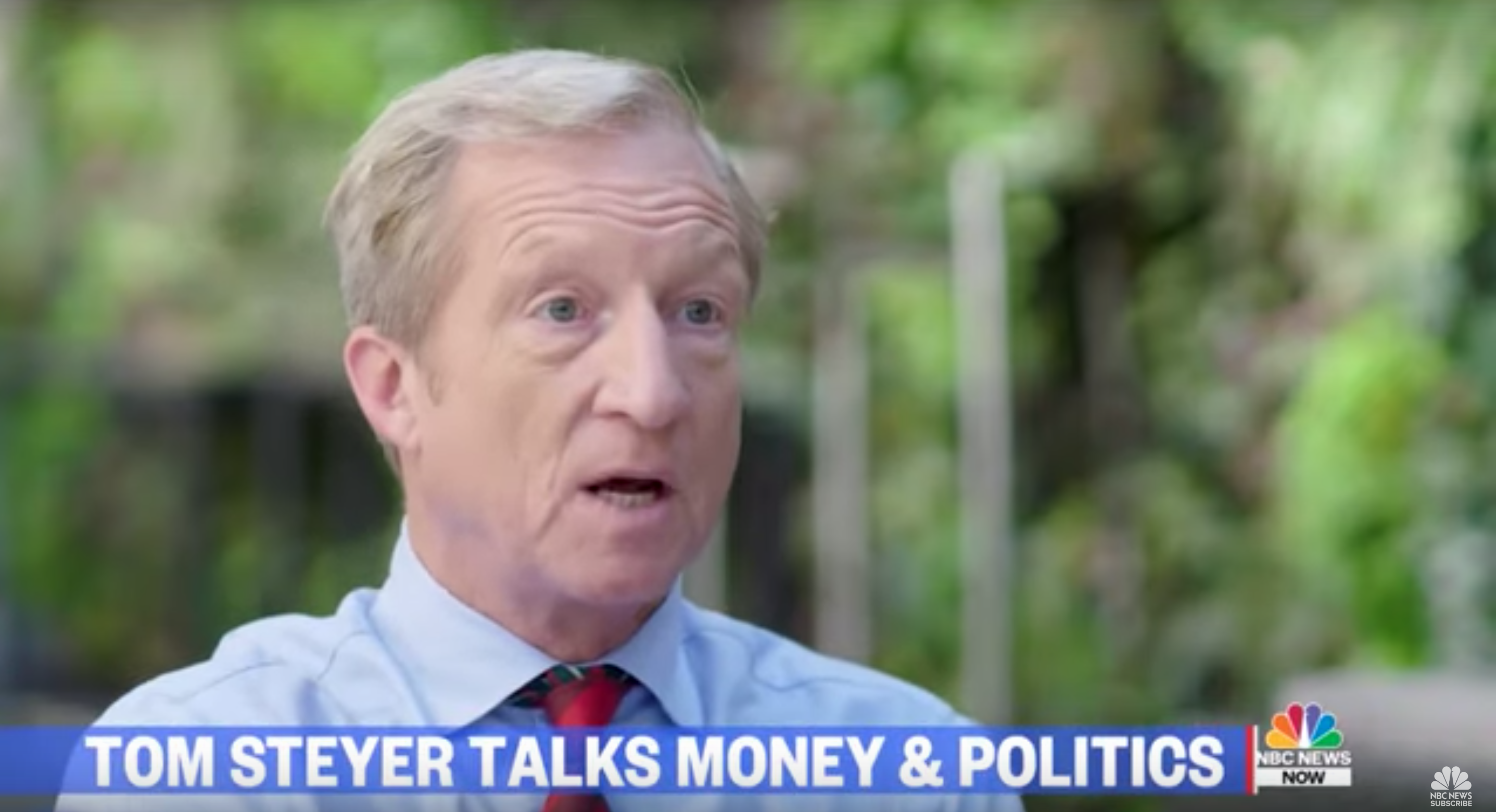 It was part of the International Plan for Climate Justice (IPCJ) Steyer announced Sept. 27, the same week the liberal media were promoting climate protests.

According to The Hill, $20 billion a year would go to “climate justice projects,” which included the Green Climate Fund AND a new “Global Green New Deal Fund.” The latter would be “a new US-led global climate finance vessel to catalyze new private capital into green technologies and projects, particularly in rapidly developing nations.” And that was just one piece of his plan.

Goals also included transitioning the United States to a “carbon-neutral” economy by 2045, as well as making all “noncombat military operations, facilities and contracts carbon-neutral by the year 2030.”

Steyer declared he would make the climate crisis “the heart” of his foreign policy on “day one” of his presidency. He would recommit to the Paris Climate Agreement. President Donald Trump withdrew two years ago.

He said he would work with other nations to ensure a “comprehensive response to the intensifying climate crisis, accelerate the transition to a fully decarbonized and sustainable global economy, and shepherd a secure, peaceful future.”

However, the president and founder of the Copenhagen Census Center, Bjørn Lomborg, took a very different view of the Paris agreement. He estimated in 2017 it would cost between $1 trillion and 2 trillion per year, and its effect on global temperatures — insignificant.

“We will spend at least one hundred trillion dollars in order to reduce the temperature, by the end of the century, by a grand total of three-tenths of one degree,” Lomborg said.

The cost and potential futility of the Paris agreement didn’t deter Steyer who connected Article 2 of the constitution’s obligations of a commander-in-chief to combatting climate change in his IPCJ.

“There is no higher priority for the Commander in Chief than keeping America safe. To achieve that goal, our armed forces must be climate-ready. Climate change exacerbates conditions already challenging national security, and it has been identified consistently by the military as a threat multiplier,” he wrote.

The IPCJ would also include “Quadrupling U.S. investment in the development and deployment of break-through clean energy technologies,” a goal to “Triple funding to the World Health Organization, Centers for Disease Control, and National Institutes of Health focused on air pollution and climate,” an end “to coal financing” and an end to the “expansion of fossil fuel infrastructure in the United States.”

In other words, a massive expansion of government shouldered by taxpayers or more debt.

He also proposed joining the “Powering Past Coal Coalition to end all U.S. coal by 2030.” The coalition (actually called The Powering Past Coal Alliance) is a collection of national and sub-national governments, businesses and organizations that promotes clean energy and advocates phasing “out unabated coal-fired electricity generation no later than 2030, with the rest of the world no later than 2050 to limit global warming and the impacts of climate change.”

Steyer claims to be very anti-coal, in spite of making millions investing in coal through his own hedge fund Farallon Capital. In 2013, his Farallon Capital Management was working on a deal in Australia to create one of the largest coal mining operations on the continent. His firm also invested heavily in coal operations in Indonesia. Those deals increased coal production by at least 70 million tons.

Steyer has claimed he divested from coal, but information regarding hundreds of millions in assets missing from federal filings made it impossible to confirm if he has divested or not.

The Hill failed to include any criticism of Steyer’s proposal.