Nothing “free” ever really is, but that didn’t stop The Washington Post from depicting “free” college as a “no-lose proposition for a politician.” The Post noted that several Democratic presidential candidates have pledged to do just that.

But the Post acknowledged the devil is not in the details, it is the details. Currently liberals are all fighting over those to decide not only which taxpayers pay for it, but who should be eligible in the first place. 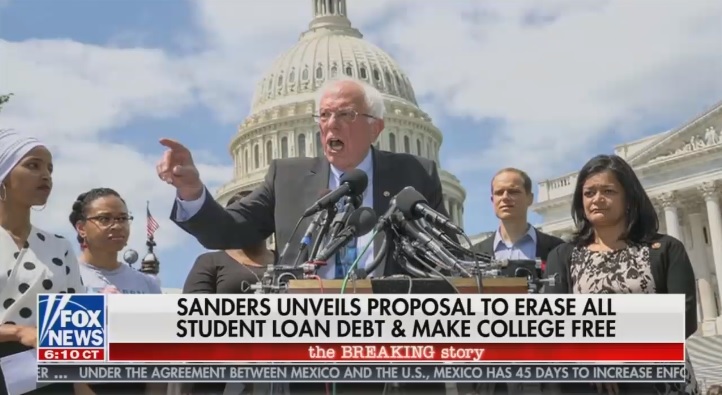 The liberal rift was caused by “economic and social tensions.”

That debate raises questions like “Should it be restricted to those of limited means? Or should everyone benefit equally, even if it’s a student who has been raised amid privilege and goes on to become a high-earning doctor or a lawyer?" Douglas-Gabriel suggested that the fundamental question on free college resided on the number of years in education covered and “who deserve[d] it for free.”

She also included several proponents including executive director of the College Promise Campaign Martha Kanter, the “left-leaning" Century Foundation, and the “liberal” Center for American Progress. Kanter wasn’t identified as President Barack Obama’s Under Secretary of Education until the last paragraph.

No conservative think tanks were cited as critics or with alternative proposals for higher education opportunities to a larger number of Americans. The only criticism Douglas-Gabriel included was a brief note on how “lawmakers in some states” considered it “economically untenable” to cover tuition upfront.

Heritage policy analyst Mary Clare Amselem had a far different recipe for education policy than those the Post chose to interview. She criticized California’s expansion of its free college program in 2018, as well as Sanders’ proposals in 2019.

“Loan forgiveness will not be a bailout for the middle class, but rather for colleges and universities,” Anselem wrote after Sanders introduced a loan forgiveness and tuition-free college bill. “The reason schools keep raising their tuition is that students have easy access to federal student loans, and the government has a near-monopoly on the sector. Colleges know they can keep raising tuition without fear of losing students because federal loans serve as a guaranteed subsidy.”

She has also urged policymakers to encourage “competition,” and reduce regulation and subsidization of higher education, rather than increasing the burden on taxpayers.