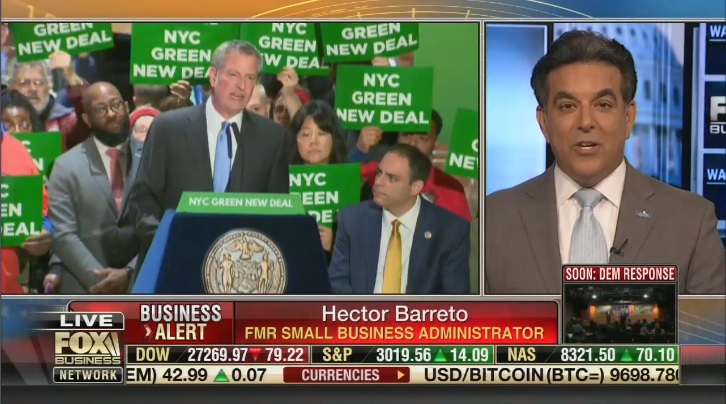 “Terrible,” Barreto replied. “They’re working people too.” He added, “This is a killer and it will actually lose jobs, not create jobs.”

On the campaign trail, de Blasio has tried to go further left than his opponents, vying for the support of American socialists, according to The Atlantic. His new economic platform included a minimum wage of $15 per hour, mandatory paid vacations, time-and-a half for hourly workers who make less than $50K annually, and union protections.

Business leaders told FBN it was “overreach,” a “death sentence for full-time employment” and “the wrong message.”

“‘This is overreach’ is an understatement,” 1 Empire Group CEO John Burnett said. He explained that regulations already put “enormous pressure” on small businesses in New York City. Burnett added, “I see this as a death sentence for full-time employment.”

By driving up costs, he anticipated businesses would replace workers with kiosks.

“It's almost, to your point, incenting small businesses to find new ways to produce products and services without people,” Barreto replied.

That’s why he called the Workers' Bill of Rights “exactly the wrong message” to send to voters.

In a dig at many Democratic candidates’ push for a $15 minimum wage, Benchmark Investments CEO Kevin Kelly cited Democratic socialist Sen. Bernie Sanders' (I-VT) wage dispute with his own campaign.

When workers weren’t making $15-an-hour, “What did they do? They ended up cutting the hours worked,” Kelly said. After days of mockery, Sanders’ campaign raised the workers’ salaries. Kelly suggested businesses might also cut hours if a dramatic wage increase was mandated.

Barreto dismissed the wage hike as an “applause line at a progressive rally." "Small businesses will tell you, if they ever talk to a small business, that this will be a killer for small business,” he said.

Focusing on unintended consequences, Asman and Fox Business correspondent Susan Li brought up evidence from cities that raised wages, and are now laying off workers. Li cited Seattle in particular, where they found the cost-benefit analysis was “3 to 1.” The Congressional Budget Office (CBO) also estimated that a $15 minimum wage would cost at least 1.3 million jobs.