Liberal presidential candidate Sen. Elizabeth Warren (D-MA) envisioned an economic crash just around the corner, and the far-left hosts of The Young Turks could not contain their excitement. 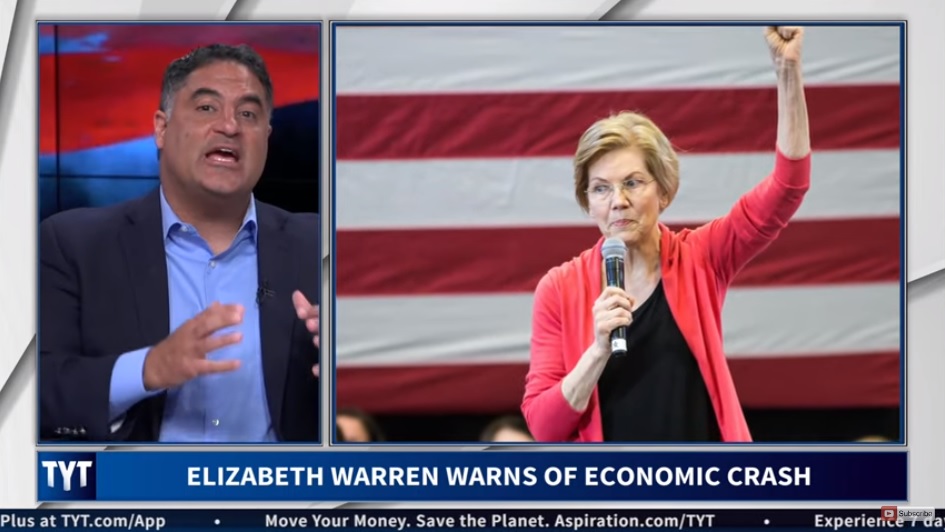 It seems Warren and The Young Turks share the same delusion about the state of the current economy being awful.

Young Turks co-host Ana Kasparian began by applauding Warren for “finally sounding alarms on what the reality is of our economic situation.”

She accused the media of regurgitating “talking points about how the economy is doing so well” and claimed with just “a little bit deeper dive you’ll find that the economy is not doing well.”

Warren wrote on Medium July 22, warning about a “coming economic crash and how to stop it.” She outlined how her policy proposals would prevent the “catastrophe” she anticipated due to consumer and business debt and other issues.

“This is her wheelhouse, she’s right on this. She’s right to have her hair on fire here,” co-host Cenk Uygur said. He also called the post “nearly perfect,” and her policy proposals “all wonderful.”

Buying into Warren’s warnings, Kasparian cheered her for “finally” calling attention to consumer and corporate debt, describing it as an issue that’s been “driving [her] nuts.”

Uygur agreed, describing Warren’s post as “pitch-perfect for two reasons.” He talked about his own conversations with progressive leaders in which they all agreed that “somebody’s got to start saying the economy’s gonna crash because it’s gonna crash.”

Uygur argued that the economy was “built to bust” and “inflated” by stock buybacks.

He also gushed how she “nailed” the problem of subprime lending “five years ahead of time”in a book she wrote in 2003.

“No one’s better at this than Elizabeth Warren is,” he declared.

“The whole subprime mortgage crisis is in the works again and it’s so frustrating that no one’s paying attention to it.,” Kasparian claimed.

Uygur concluded the segment by reminding viewers that Warren didn’t write her piece “just because she’s a progressive,” but because it’s “the correct financial analysis.”

He praised Warren for campaigning to “stop this train before it crashes,” an issue he thought “everyone should agree to” and “anyone with any sense recognizes.”

“Unfortunately, almost no one else in government has any sense,” Uygur complained.

The Young Turks is very far-left — further than MSNBC. Its founder and host Uygur is an Armenian genocide denier, according to The Daily Wire. And in spite of claims it is about “honesty,” Capital Research Center called the program out for its “political spin, half-truths, and even outright lies” in a 2018 report.

It used to be part of the left-wing Media Consortium which received funds from donors including billionaire George Soros. The Consortium shut down in 2018 after many of its members became “strong voices in the national media.”