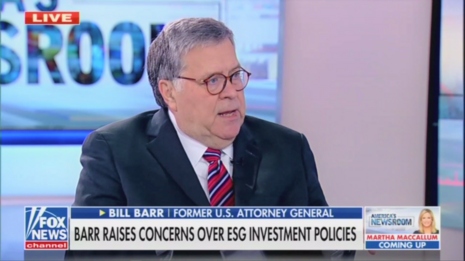 ESG policies are “abusive” and likely unlawful, Barr said during a Sept. 7 appearance on Fox News’s America’s Newsroom. He added that ESG standards should be opposed because leftists are using them to circumvent “the whole democratic process.”

Barr explained that woke companies can subvert the democratic process by hiding behind exchange traded funds (ETFs) and using their profits to advance their political goals. “They’re just pursuing their political preferences and using other people’s money to have the weight to do it,” Barr said. Many ETFs are owned by the “big three” woke investment firms — BlackRock, Vanguard and State Street, according to Barr.

These “big three” investment firms wield influence to set national policy by using “other people’s money to throw their weight around,” Barr said. As a result, Barr said, ESG policies a political threat:

“I think we have to look at this politically, because this means a handful of companies can decide our energy policy, our equity policy and stuff like that just by going and hammering the big companies over the head, and saying, you know, ‘We own ten percent of your company and we’re gonna throw you out.’”

Barr referenced his recent Wall Street Journal op-ed on the ESG movement during his interview, writing that ESG policies are potentially unlawful: “The sole interest rule requires investment fiduciaries to act to maximize financial returns, not to promote social or political objectives.”

In other words, companies exist to make money for their shareholders, not to meet arbitrary identity quotas for “LGBTQ+” individuals on company boards.

“The true problem with ESG runs deeper: the unprecedented concentration of wealth accumulated by the Big Three, which now collectively own more than $20 trillion in assets. That’s comparable to the entire annual output of the U.S. economy. The Big Three use their vast economic clout to push a social and political agenda that many Americans don’t support and never voted for. It’s a usurpation of their political rights.” [Emphasis added]

But there are ways to fight back. One of the strongest, Barr declared in his piece, is that investment firms can be held liable for “violating their fiduciary duties” when they prioritize shadowy ESG standards above their own shareholders.

Nineteen state attorneys general used that argument, among others, to slam ESG policies in an Aug. 4 letter. They argued BlackRock and other woke asset managers are bankrolling policies that “increase energy prices, drive inflation, and weaken the national security of the United States.”