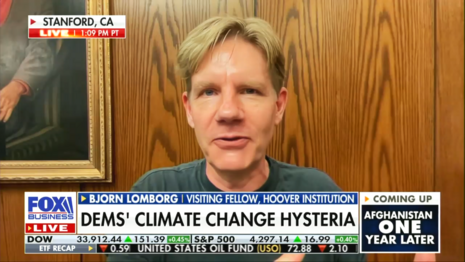 Lomborg didn’t mince words, calling the bill “incredibly expensive but almost worthless.” In fact, it won’t significantly alter the world’s temperature. Lomborg concluded that one estimate of a reduction in carbon emissions found that the world’s temperature wouldn’t even budge by a “thousandth of a degree fahrenheit. That’s just, nothing!”

But Lomborg’s estimate of the bill’s effect on climate turned out to be miniscule. Lomborg predicted a reduction of global temperatures of “less than three one-hundredths of a degree by the end of the century. We will not be able to measure that.”

“You’re spending $369 billion, and you won’t be able to measure the impact,” Lomborg said. “Maybe we should have known that and maybe people would have voted differently had they known.”

Lomborg added that Biden’s plans to “eliminate fossil fuels” would be “fantastically expensive” and impractical. “Remember, everything you like about civilization is powered by lots and lots of energy,” he said. “Most of that energy today comes from fossil fuels.”

Biden is expected to sign the so-called “Inflation Reduction Act” into law today in an effort to “tackle climate change,” according to The Washington Post. But Lomborg found little evidence that Biden’s bill would impact the global climate after he plugged in estimates of carbon emission reduction into the United Nations climate model. “It’s not rocket science,” he said.

But few scientists or journalists have actually examined Biden’s climate promises, despite the huge price tag. “The spending bill, just for the climate bit, is estimated at $369 billion,” Lomborg said. “And no one is saying, ‘Well, how much will that actually do?’”