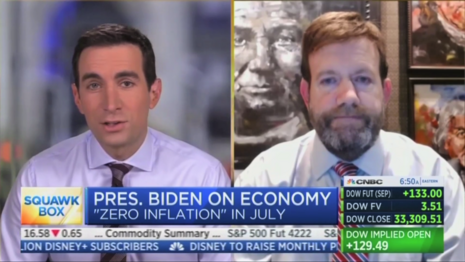 President Joe Biden said the economy had “zero inflation last month” during an Aug. 10 event at the White House. But Luntz didn’t mince words on his reaction to Biden’s skull-dragging press conference on the Aug. 11 edition of Squawk Box.

“It’s cynical,” Luntz said. “It is a destruction of the meaning of words; it’s Orwellian at its worst.” Luntz also said that Americans will remember Biden’s inflation nonsense for “playing games with the English language.”

And Luntz didn’t stop there. He later slammed Biden for his zero inflation hoax. It is “the height of hypocrisy and a president has the responsibility to tell the American people the truth,” Luntz said.

Luntz emphasized that Biden’s invective “plays into our belief that we can’t trust our elected officials and we can’t trust our institutions.” And to make things worse, it doesn’t seem that Americans are buying the government line on inflation, according to Luntz.

“We’ve been polling this issue, and the American people think that it’s harder now to make it to get by,” he said. “More than seventy percent of Americans have trouble making ends meet. One out of four literally have trouble paying their bills at the end of the week or end of the month because of inflation.”

The pollster said that Americans should also be angry at Biden for his attempts to redefine the word “recession.” “For Joe Biden to redefine what that means and to attempt to do it for the word ‘recession’ is really the thing that the American people should be angriest about.”