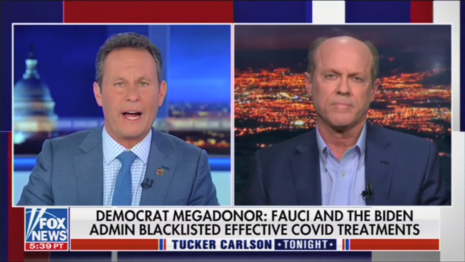 Entrepreneur Steve Kirsch said that he watched his “friends die and be injured” by the COVID-19 vaccines on yesterday’s edition of Tucker Carlson Tonight. But instead of receiving a fair hearing, Democrats gave him the cold shoulder.

“They violated my trust,” Kirsch told Fox News host Brian Kilmeade on the Aug. 10 edition of Tucker Carlson Tonight. “The agencies — the FDA, the CDC, the NIH — said that these vaccines were safe and effective. And when I started seeing my friends die and be injured, and I started looking at the data, there was no question that this vaccine is the most dangerous vaccine ever created by man. It is a thousand times more deadly than the smallpox vaccine, and that’s too unsafe for people to use.”

But despite his best efforts, Kirsch said that no Democratic member of Congress ever met with him to discuss his concerns about vaccine injuries. “I could not get even a single minute in front of any Democratic congressman,” Kirsch said. “The best I got was that Ro Khanna gave me off to a staff member who took two months to get back to me. And when I asked if she read what I had sent her, she said ‘No, it disagreed with the CDC, so it’s not right, and so I didn’t really read it.’”

The Silicon Valley-based businessman estimated the number of Americans killed or injured by the COVID-19 vaccination campaign. “Hundreds of thousands of Americans have been killed by this vaccine and millions have been injured,” Kirsch said. “Clearly, you are more likely to be injured or dead from the vaccine than if you were unvaccinated.”

Kirsch also signaled support for Sen. Ron Johnson (R-WI) because he’s “the only person in Congress who cares at all about the millions of people who are vaccine-injured.” He added, “And my estimates are that there [are] tens of millions of vaccine-injured in America.”

“Ron Johnson has been just very consistent about bringing [this] problem to the attention of the American public,”  Kirsch said.

Johnson invited a group of doctors and medical experts to the U.S. Senate on Jan. 24, to discuss “censorship, intimidation” and “professional reprisal” against those in the medical field who dared to express an opinion that contradicted the COVID-19 vaccine narrative.

A document reveal from the Department of Homeland Security uncovered a dystopian “Disinformation Governance Board” that was designed to target Americans who challenged the COVID-19 vaccine narrative.