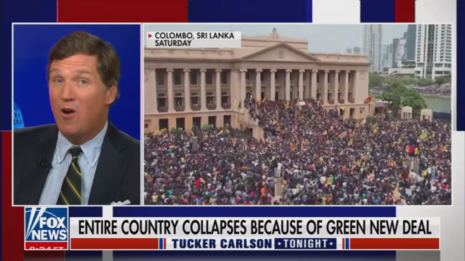 “ESG is the latest fad on Wall Street,” Carlson said on the July 11 edition of Tucker Carlson Tonight. “Now, ESG has no real definition, but in effect it requires companies and countries to shut down their most productive sectors in the name of climate change and equity.”

A recent and catastrophic example of ESG’s destructive policies is the recent turmoil in Sri Lanka, Carlson said.

Sri Lanka’s economy collapsed after “a government ban on chemical fertilizers” crushed farmers and annihilated harvests, according to CNN. That was despite research firm World Economics awarding Sri Lanka an ESG score of 98.1, almost twice that of the United States, which received a score of 58.7.

“The saddest victim of ESG is Sri Lanka,” Carlson said. “Once a prosperous country right off the southern Coast of India, Sri Lanka has collapsed. Inflation is over fifty percent, food prices are up more than eighty percent. This week, Sri Lanka’s president and prime minister had to flee the country. Citizens stormed their residences, went through their sock drawers and swam in their swimming pools.”

Former Sri Lankan Acting President Ranil Wickremesinghe revealed his plans “to make Sri Lanka a rich country by 2025” in a 2018 article. His predecessor, Gotabaya Rajapaksa, “fled the country amid protests over the country’s economic crisis,” according to the WEF article.

The crisis in Sri Lanka was no accident, Carlson said. “So how’d this happen?” Carlson asked. “Well, in April of 2021 Sri Lanka’s leaders banned chemical fertilizers. Now, ninety percent of the country’s farms used chemical fertilizers. So what happened next? A third of Sri Lanka’s farms shut down completely. You know what happens when farms shut down? Hmm, quiz. Well, people starve.”

“Here’s the good news,” Carlson joked. “Sri Lanka has a virtually perfect ESG score. Sri Lanka scores 98 on the ESG scale. That’s more than double our score here in the United States. So we’re going to need to double our efforts to shut down farms.”