Liberal billionaire George Soros claimed that the greatest threat to the U.S. is “far-right extremists” on the U.S. Supreme Court and not dictators like China’s Xi Jinping or Russia’s Vladimir Putin. 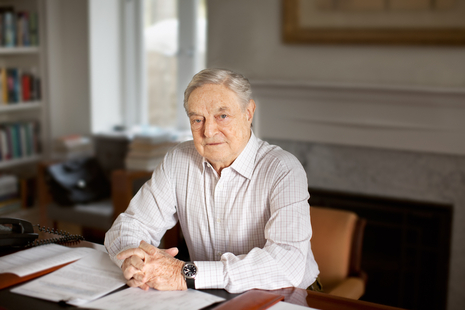 “From abroad, the US is threatened by repressive regimes led by Xi Jinping in China and Vladimir Putin’s Russia who want to impose an autocratic form of government on the world,” Soros wrote in an op-ed published by Project Syndicate. “But the threat to the US from the domestic enemies of democracy is even greater. They include the current Supreme Court, which is dominated by far-right extremists, and Donald Trump’s Republican Party, which placed those extremists on the Court. [Emphasis added].

He attempted to spin the overturning of Roe v. Wade as a conspiracy against women on Twitter. “The Roe v. Wade decision is part of a carefully laid plan to turn the US into a repressive regime,” Soros tweeted. “We must do everything we can to prevent that.”

The Roe v. Wade decision is part of a carefully laid plan to turn the US into a repressive regime. We must do everything we can to prevent that. https://t.co/s48Ci4dN7s

But there was one thing the chair of Open Society Foundations neglected to mention in his tweet. A radical leftist opinion site — one Soros pays for, called Project Syndicate (PS) – published Soros’s article. PS delivers thousands of extremist, far-left op-eds to a global audience and boasts a membership of “over 600 media outlets” in 156 countries. Soros and wealthy leftist philanthropist and Microsoft co-founder Bill Gates funded PS with $1,242,105 and $5,280,186, respectively, from 2012 to 2019, according to Foundation Directory Online.

Soros warned that “the right to contraception, same-sex marriage, and LGBTQ rights” might be next to go under a “far-right” Supreme Court.

But Soros didn’t stop there. He absurdly concluded the overturning of Roe could lead to a ban of interracial marriage. “Carried to its logical conclusion, this line of reasoning could even allow states to ban inter-racial marriage, as some did until 1967.” He also whined that the Environmental Protection Agency will not be able to “combat climate change” because of the recent Court decision in West Virginia v. Environmental Protection Agency.

Soros even called for Republicans to be booted out of office. “There is only one way to rein in the Supreme Court: throw the Republican Party out of office in a landslide. That would allow Congress to protect through legislation the rights” to kill unborn babies, he said. “Congress must act, starting with protecting a woman’s right to choose. If the filibuster must be amended to achieve that, so be it.”

Soros then ridiculously suggested that because he is partisan, he can comment on nonpartisan issues.

“I am a supporter of the Democratic Party, but this is not a partisan issue,” Soros wrote. “It is about reestablishing a functioning two-party political system which is at the core of American democracy.”