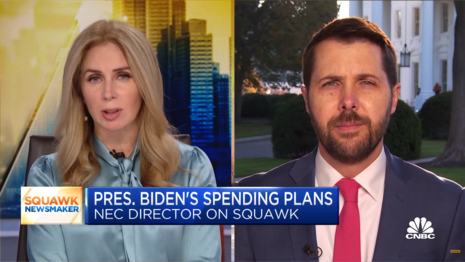 “The economy we have right now is in a transition from this his— period of historic economic growth to a period that can be more stable, resilient growth. Uh, that requires focusing on inflation,” White House Director of the National Economic Council, Brian Deese, said on the May 31 edition of Squawk Box.

But CNBC host Becky Quick grilled Deese, who largely echoed Biden’s absurd May 30 op-ed headlined “Joe Biden: My Plan for Fighting Inflation.” “None of those steps, really, are going to address the skyrocketing costs that people have seen at the gas pump, or in line at uh, the food, grocery store, or what they’ve seen at their, in rent prices and things that have gone up,” Quick said.

And she didn’t stop there. “None of those [steps] will fix things in the very short term. These are long-term issues that maybe will help down the road with some of the supply chain issues.” Quick also broke down how the Biden administration has repeatedly failed to lower inflation or gas prices with previous policies. “SPR release didn’t work, didn’t bring oil and gas prices down. And we’ve seen a great deal of inflation that’s come since then.”

Energy Information Administration data indicate that the average price for gas was $4.62 in the final week of May, 2022. That means gas prices shot up by more than 135 percent compared to the last week in May, 2020, when gas was roughly $1.96 and former President Donald Trump was still in office.

Deese responded, arguing that Biden’s plan will help the country, but that it will be gradual. “Well, there’s no single silver bullet,” he said, but Biden’s three-step plan to lower inflation “really [does] matter in both the immediate-term and the medium-term.”

He then referenced “housing” reform but undercut himself immediately afterward: “Building more affordable housing supply: Yes, it doesn’t happen overnight, but the sooner we start that process, the more we’re going to start to relieve pressure on the market.”

He also conceded that Biden’s move to reduce internet bills “doesn’t solve the entire problem of household balance sheet, but it does make a difference at the margin.”