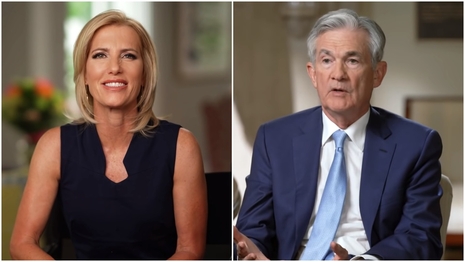 The Fed jacked up interest rates to the highest level in more than 20 years in a seemingly desperate attempt to curb inflation, according to CNBC.

Ingraham herself slammed Federal Reserve chairman Jerome Powell for having suggested the economy was “all roses and sunshine.”

“The economy is, um, is doing, doing fairly well. Um, it’s uh, we expect growth to be, to be solid this year.” Powell doubled down, “It’s a strong economy, and nothing about it suggests that it’s, that it’s close to or vulnerable to a recession.”

Easy to say for a guy with a net worth of $50 million, according to Celebrity Net Worth.

Former chair of the Council of Economic Advisors, Kevin Hassett, pushed back on Powell’s Soviet-like propaganda efforts on Ingraham’s show. Hassett said that “we’re probably in a recession already. Uh, and to put that in perspective, I looked back all the way to the second World War, and 94 percent of the time if you had a decline in GDP that large, you were about to have a recession or already in recession — 94 percent of the time,” Hassett emphasized.

Hasset’s mention of a “decline” in Gross Domestic Product (GDP) was a reference to a recent government report. The GDP contracted by a shocking 1.4 percent in the first quarter, which completely upended the predictions of some economists who wrongly estimated a 1 percent increase in GDP.

Business magazine Forbes interpreted the news as truly dire for everyday Americans. “We’re officially here. Growth is negative and inflation is at 9 percent. It’s 1974 all over again.” The April 29 story was headlined, “Hi, Stagflation.”

Ingraham agreed with Hasset’s assessment of the economy, saying, “Interest rates are going up, cars, houses. It’s going to affect us across the board.”

But Ingraham didn’t stop there. Her next target was Treasury secretary Janet Yellen. Yellen ridiculously called the labor market a “huge success” in a May 4 interview with The Wall Street Journal.

In yet another edition of “Rich Elitists Give Hot Takes on the Economy,” Yellen has a net worth of $16 million, according to Celebrity Net Worth.

Hasset punctured Yellen’s absurd claims of a strong labor market. “The thing that [Yellen’s] hiding” was the full number of unemployed Americans. “There were so many people that left the labor force during COVID,” Hasset said, but those people still aren’t counted as unemployed by government officials unless they’re actively looking for work. “The percentage of Americans that actually have jobs is way below where it was before COVID. [It] hasn’t recovered at all.”