Some of the most powerful media outlets and figures in America are upset about Tesla CEO Elon Musk’s offer to buy Twitter. 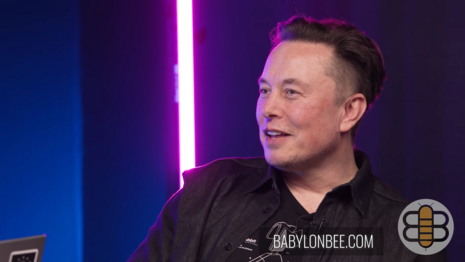 Musk shocked Twitter with a $43 billion cash offer to buy out the company. He shared a letter he wrote to Twitter’s board April 13. “Twitter has extraordinary potential,” he said in the letter. “I will unlock it.”

The liberal media and Twitter influencers panicked over the news and called Musk  everything from an oligarch to — wait for it — a goblin.

“The goblin is serious,” Axios wrote in the first sentence of an April 14 article headlined, “Elon Musk goes into full goblin mode.” The outlet assessed Musk’s “threat level” as that of “a very dangerous beast.” The leftist new organization compared Musk to “a movie supervillain, commanding seemingly unlimited resources with which to finance his mischief-making.”

CNN New Day host John Berman said on the April 14 edition of his show, “Twitter on fire this morning over — Twitter! If there’s one thing Twitter loves, it is itself. It shares that with billionaire Elon Musk.”

Berman asked CNN Chief Media Correspondent Brian Stelter to explain, “what just happened.” Stelter said Elon is an “edgelord, which means he likes to walk right up to the edge of the rules without quite breaking them.” Stelter summed up Musk’s offer: $54.20 a share “to buy up the rest of Twitter that he doesn’t have. Of course, $54.20, that’s $4.20, that's a code for marijuana, you know, which he very much enjoys. So is this all a troll, or is this very real?”

Stelter argued that the deal was real and threatening enough to worry Twitter’s investors and the company itself. “It’s a huge problem for Twitter right now,” he said.

Washington Post columnist Max Boot tweeted: “I am frightened by the impact on society and politics if Elon Musk acquires Twitter. He seems to believe that on social media anything goes. For democracy to survive, we need more content moderation, not less.”

I am frightened by the impact on society and politics if Elon Musk acquires Twitter. He seems to believe that on social media anything goes. For democracy to survive, we need more content moderation, not less.

Boot wasn’t the only one urging a referee to come off the sidelines and stop Musk. CNBC host Jim Cramer called out Musk and the Securities and Exchange Commission on Twitter: “Hello Commission? You are being spun and mutilated.” He then tweeted at SEC Gary Gensler, “this is not right.”

@elonmusk "those bastards" the SEC. Hello Commission? You are being spun and mutilated. @GaryGensler this is not right.

University of California Berkeley professor Robert Reich tweeted: “We are watching a hostile takeover of Twitter by the richest man in the world who regularly tries to silence critics. This is what oligarchy looks like.”

We are watching a hostile takeover of Twitter by the richest man in the world who regularly tries to silence critics.

Reich has written for The Washington Post, which is owned by the second richest man in the world, former Amazon CEO Jeff Bezos.

Musk explained his reasons for buying Twitter in his letter to the SEC. He wrote, “I invested in Twitter as I believe in its potential to be the platform for free speech around the globe, and I believe free speech is a societal imperative for a functioning democracy.” He also announced his intention to “acquire” Twitter as “a private company.”