Schiff warned on the March 12 edition of his radio show that while “everybody looks to the 1970s as the worst inflation ever,” in reality the “inflation that we have just experienced in the prior twelve months is higher than any twelve-month period during the entirety of the 1970s.” He also cautioned that the U.S. was possibly on the fast track to stagflation and even hyperinflation. 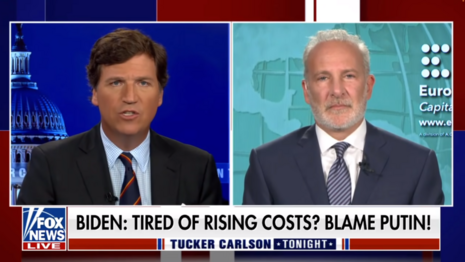 And in Schiff’s view, “we’re just getting started.”

He also claimed that “inflation is going to cause recession” because the government will be forced to stimulate the economy, thus creating even worse inflation. Schiff said.  “And what’s amazing to me is the fact that nobody is questioning any of this.”

Schiff later criticized the “mainstream” in finance for trusting the Fed’s interest hikes will work without question: “What if you can’t put out a 7.9 percent inflation fire with 1.5 percent interest rates?” he said. “Maybe a quarter-point rate hike won’t cut it. Maybe it’s too little, too late.”

The Federal Reserve announced it is raising interest rates next week by a “quarter-point, or 25 basis points,” according to CNBC. The outlet reported that the Fed has been “under pressure from rising inflation to raise interest rates even before the Ukraine conflict.”

Schiff painted a picture of what the world might look like if the Fed fails to cool record inflation and has to go “medieval” by raising interest rates up to 10 percent or higher. “Nobody is considering the impact that that’s going to have, because it’s gonna be catastrophic,” he said.

Schiff pondered how the “overleveraged U.S. economy” would react:

“What would happen to the real estate market if interest rates were ten percent, meaning that maybe the cheapest mortgage you could get was twelve percent?” he asked.

Schiff answered his own question bluntly: “The real estate market would crash.” After that, the stock market “would crash by definition if interest rates went up that much because stock prices are a function of interest rates,” he said.

The next domino would be the banking system, he said.

The final domino: “The government would be insolvent. We have a $30-trillion national debt.” Schiff emphasized the cataclysmic events that would transpire if the current inflation crisis continues to spiral out of control:

“Not only is it gonna be stagflation, but it’s gonna be an inflationary depression, because it’s not just a stagnant economy that we’re gonna have, it’s gonna be a depression and it’s not just high inflation, we may even get hyperinflation,” he said. “We are gonna get the worst of both worlds, yet nobody in the mainstream is even contemplating the possibility that this happens.”