Nasty Inflation Got You Down? NY Times: Blame the Federal Reserve, Not Biden!

The New York Times pinned responsibility for “containing inflation” on the U.S. Federal Reserve, despite President Joe Biden’s vague promises during the State of the Union Address to “fight inflation” and “build a better America.” It seems that even the liberal media doesn’t trust Biden to enact policies that could help lower inflation anymore. 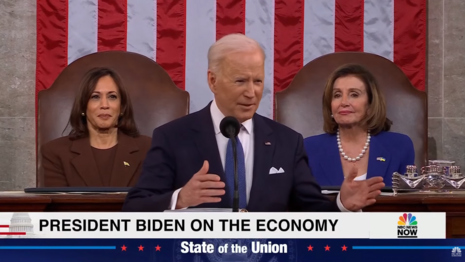 New York Times reporter Jeanna Smialek claimed in a March 1 article that Biden, despite some “economic wins,” did not have much power to fight inflation. Unfortunately for Biden, she explained, inflation matters: “Inflation is painfully high,” and “voters are unhappy about it.”

Smialek, however, completely rejected Biden’s declaration that he had “a better plan to fight inflation.” She argued instead that the responsibility for cooling down inflation belongs almost entirely to the Federal Reserve, but warned that the Fed would likely inflict “economic pain” in the process.

That supposed gain in jobs was not really a gain at all, as ADP Chief Economist Nela Richardson explained in January. “The economy — and this is an important point — hasn’t added one single job from the 2019 high watermark. Not one. All the jobs that we have seen gained are recovered jobs that were lost.”

Smialek also cited unemployment “fall[ing] below 4 percent and growth [that] has been more rapid than in many other advanced economies.”

Former investment banker and TV pundit Carol Roth demolished both points in a January tweet: “If you burn down a house and it gets rebuilt, you have not ‘created new housing;’ you replaced it. The same goes for jobs; the govt closed businesses and ‘burned down’ the jobs associated with them. Those that have been reclaimed does not equate to ‘creating new jobs’.”

Smialek continued to downplay Biden’s apparent solutions to reducing inflation, instead laying cover for the administration and heaping blame on the Fed. She portrayed White House policies as “historically” a “backup line of defense,” unlike the Fed. Biden claimed otherwise.

But Smialek countered that statement by Biden, instead continuing to point at the Fed: “containing inflation” is “primarily the Federal Reserve’s job,” whatever the president may say.

Smialek then quoted Harvard economist Jason Furman, who threw cold water on Biden’s supposed “solution” to inflation. He argued that the president’s “ideas to improve supply chains and expand work force opportunities” were not “going to add up to a lot” in terms of cooling rapid price gains, The Times summarized.

Conservatives are under attack. Contact The New York Times at 1-(800) 698-4637 and demand it stop shifting blame off of Biden’s terrible economic policies.