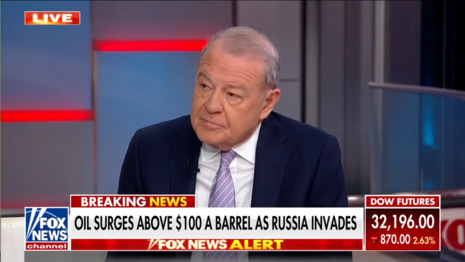 Hegseth warned of the Biden administration’s “conflation” strategy in trying to pass the buck for high energy prices to the Ukraine crisis. “[W]e’re going to start to hear a conflation from this administration,” Hegseth said. “‘The reason we have inflation or the reason we have high oil prices is because of Ukraine and Ukraine only.’ We know it’s more than that.”

Varney explained who was really to blame on higher gas prices, and it wasn’t “Ukraine and Ukraine only.” “When we lost our energy independence, we gave Putin leverage,” Varney said. “When we withdrew from Afghanistan in chaos, we looked like we were fumbling. We looked like we were weak. You combine that original energy mistake with the withdrawal from Afghanistan and the weakness which was perceived about us, that’s why Putin’s doing what he’s doing.”

But Varney wasn’t finished. He went on to argue that Biden, not a distant war in Ukraine, was the original driver of high gas prices. “You’ve got to go back to the very first day of the Biden administration,” he said. “When they canceled the Keystone pipeline and then cut back on the drilling for oil and natural gas and restricted our energy independence, that gave Putin leverage.”

Varney predicted the devastating effects Biden’s policy blunders will have on regular Americans.

“First off, gasoline prices are gonna go up. We’ve got the price of oil at $100 a barrel this morning. Currently, we’ve got about $3.50 for a gallon of gas, regular, across the country. I think it’s going to go to $4 fairly quickly.” He then gave a dire warning on skyrocketing inflation, which already hit a 40-year record high: “Nat[ural] gas prices [are] going up — that means it’s going to cost more to heat your home.” He concluded that, “Energy price inflation will make our current inflation even worse.”

White House Press Secretary Jen Psaki appeared to jumpstart a “conflation strategy” in a press conference on Feb. 23. Psaki said in response to a question of whether gas prices would further increase for all Americans after the invasion of Ukraine: “I think as you heard the President say last week, standing up for our values is not without cost,” Psaki said. “What we’re trying to do is minimize that cost.”