Twitter, Apple, PayPal, Alphabet and Meta and their employees contributed overwhelmingly to Democrats in the lead-up to the 2022 midterms, according to OpenSecrets.

An October 2020 MRC Free Speech America report showed that Facebook and Twitter gave over 90 percent of their political contributions to Democrats during the last election cycle.

In total, Twitter employees donated a combined $127,729 to Democrats and just $250 to Republicans in federal races in 2022. Democrats received 98.99 percent of Twitter employee contributions in 2020, but this election cycle saw that percentage exceeded. However, the company contributed over three times more in total ($347,270) to Democrats two years ago.

Apple employees collectively contributed 92.55 percent ($1,220,626) of their overall 2022 political contributions to Democrats, and sent just 7.45 percent ($98,239) to Republicans, according to OpenSecrets. The company banned Parler from its app store after the Jan. 6, 2021, Capitol riot in an apparent effort to silence conservative voices. Just last month, the company removed Ye’s “Essentials” playlist from iTunes.

A PayPal spokesperson told MRC Free Speech America that “PayPal has suspended all PAC contributions since 2020.” But OpenSecrets data indicate the company made $2,000 in PAC contributions during the 2022 cycle.

PayPal and its employees gave Democrat candidates 92.11 percent ($73,274) of their overall political contributions during the 2022 cycle and Republicans received 7.89 percent ($6,274), according to OpenSecrets. Meanwhile, PayPal recently issued – then backtracked on – a totalitarian plan to fine users up to $2,500 if they “promote misinformation.” 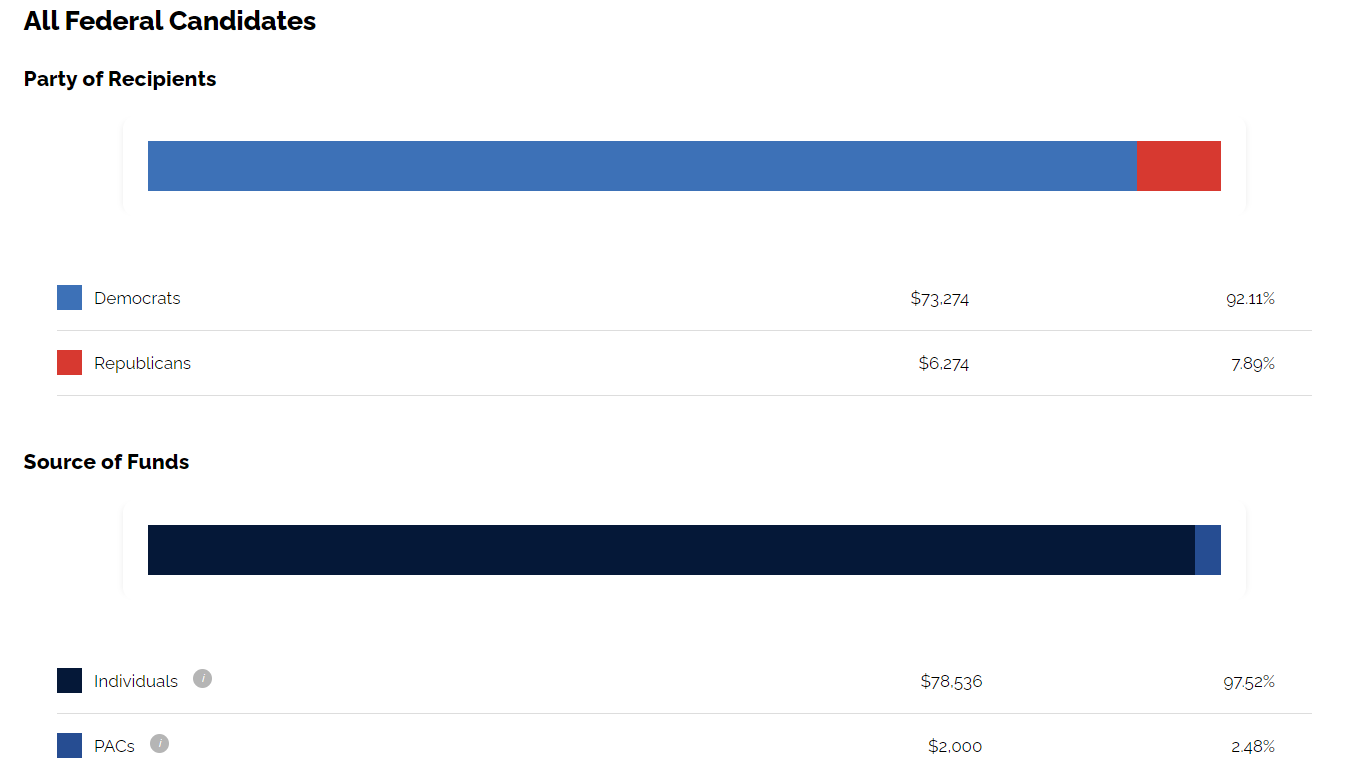 Meta’s proportion of campaign contributions given to Democrats came in close behind Alphabet’s. The Facebook parent company gave Democrats 79.96 percent of its overall contributions this election cycle ($819,720) and a scanty 20.04 percent ($205,485) to Republicans, OpenSecrets data indicate.

Facebook has a history of catering to leftist demands. Perhaps most egregiously, the platform censored New York Post reporting on the Hunter Biden laptop scandal in the lead-up to the 2020 election after an FBI tip about supposed “Russian propaganda,” as company CEO Mark Zuckerberg told podcast host Joe Rogan in August.