Media Try to Bail Out Worst Jobs Report Since 2010

The latest jobs report was a stunner, falling more than 100,000 jobs short of expectations.

The Bureau of Labor Statistics announced on June 3, that only 38,000 new jobs were added in May 2016. That was less than one-quarter of the jobs anticipated. The liberal media predictably spun the news, before and after its announcement. 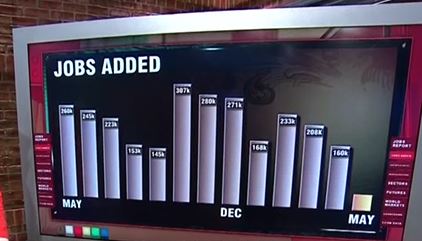 The day before the report, CNN, The Wall Street Journal, Business Insider, and Market Watch preemptively tried to prepare their readers for a “softer” number of jobs by playing up a Verizon strike of around 35,000 employees which they warned would reduce the jobs number.

“The next jobs report could stink because of 35,000 people,”  Business Insider predicted, while CNN Money celebrated the “good news” that job losses “from one month are made up the next.”

Once the jobs report was published, however, some in the media turned attention to the decrease in the unemployment  rate (down to 4.7 percent from 5 percent). The media also tried to come up with positive reasons so few jobs were added in May.

“The U.S. economy is considered to be at or near ‘full employment’ and it's expected that hiring will slow down to a certain degree,” CNN Money said on June 3, 2016.

The Washington Post similarly claimed, “[e]conomists have been warning that job growth would likely slow down as the labor market healed.”

The Street, a financial news outlet, wrote,  “If the job gains are accurate, it could mean that productivity has suddenly picked up so sharply that employers need fewer new hires,”

summarizing an argument made by a former Obama administration economics adviser Austan Goolsbee on CNBC.

“The jobs numbers are far weaker than anticipated, but the unemployment rate and number of unemployed people did still decline,” ABC’s Chief Business and Economics Correspondent, Rebecca Jarvis wrote.

Jarvis added that, “The number of unemployed people declined by 484,000 to 7.4 million.” But she left out the fact that the unemployment rate dropped not because people found work in May, but that “about half a million unemployed people stopped looking for work,” according to the Associated Press.

Currently a record 94.7 million Americans are not in the labor force, according to CNSNews. Between April and May 2016, a total of 664,000 left the labor force, either from retirement or because they couldn’t find work.