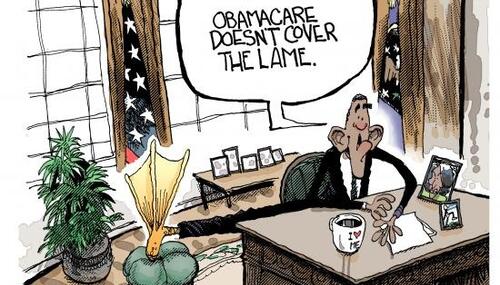 We're All The Tea Party Now

Noel Sheppard
November 7th, 2010 7:48 AM
Pollster Frank Luntz has an absolutely must-read op-ed in Sunday's Washington Post about what Tuesday's elections really meant, and what the real temper is in the country right now. In it, he listed the governmental priorities held by 60 percent of the nation:

Noel Sheppard
February 27th, 2010 3:22 PM
According to a focus group done by pollster Frank Luntz, folks that voted for Barack Obama liked the recent attack on Sarah Palin done by the cartoon series "Family Guy."As NewsBusters reported almost two weeks ago, the Valentine's Day episode of the Fox hit featured a Down Syndrome girl saying that her mother was the former governor of Alaska. This sparked a nationwide debate about…

A Tale of Two Uninsureds: President Changes Number from 46-47 Million

Jeff Poor
September 10th, 2009 6:40 AM
What's 16-17 million uninsured among 300 million Americans? Apparently not much to President Barack Obama, who slipped a not-so-subtle change to a statistic he had cited previously different during his Sept. 9 address to a joint session of Congress. The president pointed out there are "more than 30 million American citizens" who are having difficulty obtaining health insurance (…

After Giving Obama Round One, FNC's Luntz Gives Nod to Palin

Noel Sheppard
October 3rd, 2008 2:04 PM
With all the hysterical leftwing hyperbole about Fox News being a Republican talking points echo chamber, its post-debate coverage in the past week has been far more fair and balanced than others in the media.Take for example FNC contributor and pollster Frank Luntz who having declared Barack Obama the victor of last Friday's presidential debate (video embedded below the fold) gave Sarah Palin…

NB Staff
September 3rd, 2008 3:07 PM
ST. PAUL, Minn.-- Gov. Sarah Palin (R-Alaska) should hope for an open-ended forum for her debate with Obama running mate Sen. Joe Biden, argued pollster Frank Luntz. The better for him to utter the inevitable golden Biden gaffe.The key to the debate between Biden and Palin is to have it completely open. Becuase Joe Biden for the first 90 seconds is as good as it gets. He always makes the stupid…

CBS: Obama Has Chance to Be ‘Statesman,’ Show ‘Gravitas

Kyle Drennen
July 18th, 2008 4:59 PM
On Friday’s CBS "Early Show," correspondent Sheila MacVicar reported on Barack Obama’s upcoming international tour and declared: "...Senator Obama is taking to the skies to stride on the world stage. It's a chance for Americans to take a look at how he measures up as a statesman...it's an attempt to demonstrate he has the necessary gravitas to maneuver through diplomatic minefields…

Harry Smith: Hillary Will Boink Bill With Her 'Frying Pan

Mark Finkelstein
March 3rd, 2008 9:04 AM
Here at NB, we're not normally in the business of feeling sorry for MSMers like Harry Smith. But I can't help but express some sympathy for the Early Show anchor at the prospect of the feminist, Clintonite wrath that is likely to descend on his head after a comment he made this morningAmong the metaphors most likely to drive feminists up the wall is that of the angry woman yielding that symbol…

Kyle Drennen
February 14th, 2008 3:06 PM
On Thursday’s CBS "Early Show," co-host Harry Smith introduced a fawning segment on Barack Obama: "On the campaign trail, Barack Obama is often treated like a rock star. People wait hours just to hear him speak." The segment did not focus on campaign strategy or policy, but rather it focused entirely on Obama’s rhetoric as correspondent Tracy Smith touted MSNBC’s Chris…