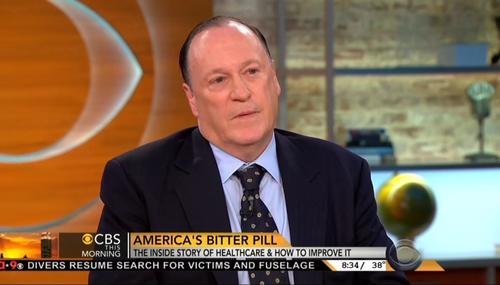 CBS Guest: Under ObamaCare ‘Everybody Is Happy Except The Taxpayer’

Jeffrey Meyer
January 5th, 2015 10:39 AM
For the past several months, CBS This Morning has been promoting the fact that unlike Good Morning America and Today they actually cover “real news.” This trend seems to have continued into 2015 with a segment exposing the increased problems with ObamaCare. On Monday morning, CBS interviewed Steven Brill, author of the book America's Bitter Pill: Money, Politics, Backroom Deals, And The Fight To…

Lynn Davidson
July 26th, 2007 1:18 PM
Environmentalists are targeting kids and using deception to get their message out. Anthropogenic global warming evangelists and wildlife filmmakers, Sarah Robertson and Adam Ravetch, made the upcoming live action “Arctic Tale” because as Robertson told the LA Times, "Global warming to a lot of people is statistics...What we wanted to do was put a face on climate change." OK, so there's the goal…