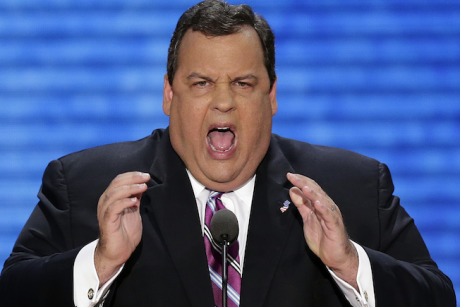 Over the weekend, Washington Monthly blogger D.R. Tucker swung between rhetorical extremes. As we’ve noted, he called a new lefty book “one of the greatest nonfiction works of all-time,” but in another post he utterly trashed New Jersey governor Chris Christie, whom he described as “David Koch’s slave,” “beyond pathetic and beyond help,” and “no longer a man.”

What set Tucker off was Christie’s opposition to New Jersey’s rejoining a regional cap-and-trade program, supposedly because Christie doesn’t want to displease righty anti-cap-and-trade groups such as the Koch-backed Americans for Prosperity.

Evidently the Thirteenth Amendment to the Constitution is still not recognized in certain parts of the United States. How else could Chris Christie remain David Koch’s slave?

As Gov. Chris Christie of New Jersey explores a 2016 presidential campaign, he is under growing pressure from his State Legislature to rejoin a regional cap-and-trade program that would limit New Jersey’s carbon emissions — and likely hurt his chances for the Republican nomination.

Mr. Christie, who withdrew from the program in 2011 as he first considered running for president in 2012, remains adamant that New Jersey not participate in the nine-state Regional Greenhouse Gas Initiative…

A good slave never, ever offends his master.

Americans for Prosperity, which receives funding from the libertarian billionaires Charles G. and David H. Koch, spent heavily in the 2010, 2012 and 2014 elections to oppose candidates who supported cap-and-trade. The group…is expected to play a key role in the 2016 Republican presidential primaries.

For all of Christie’s tough talking, it’s clear that he’s just willing to step and fetch for his owner at a moment’s notice. He has been branded, emasculated, whipped, humbled; he is no longer a man in any real sense of the word.

Christie is little more than chattel; he is beyond pathetic and beyond help. You can’t even call him the worst governor in New Jersey’s history, because only a free man can be governor, and he is neither free nor a man. He is simply property, chopping wood and carrying water for the owner of his plantation. He is Kunta Christie, nothing more.